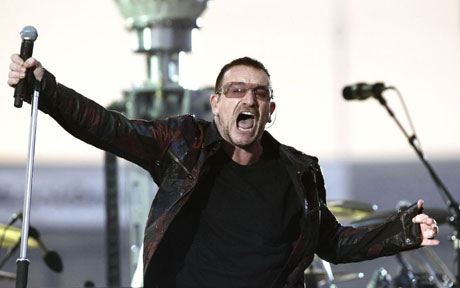 There was a humdinger of a story about Bono in the New York Post earlier this week that the Mail has picked up on this morning. According to the Post, Bono’s anti-poverty ONE foundation received $14,993,873 in donations from philanthropists in 2008, of which just $184,732 was distributed to three charities. (ONE is an “advocacy organisation” whose main purpose is to change policies, not support charities, it says.) So what happened to the rest? More than $8 million was spent on executive and employee salaries.

This isn’t gossip. The Post‘s figures are taken directly from the organisation’s 2008 tax return, the latest year for which records are available. This story follows hot on the heels of the revelation that Edun, Bono’s fashion label, has shifted some of its production base from Africa to China. A perfectly acceptable business decision, were it not for the fact that Edun is an “ethical” fashion house that was set up to aleviate poverty in … Africa.

This isn’t common-or-garden, run-of-the-mill hypocrisy, this is hypocrisy on an epic scale – stadium-filling hypocrisy. Bono browbeats Western governments for not spending more money on aid – taxpayers’ money – while doing his best to avoid paying tax himself. He chastises the private sector for not investing in African businesses, then moves his own business out of Africa. He persuades kind-hearted souls to donate money to charity, then stands by while his own foundation pays its employes 43 times as much as it gives to good causes.

Not long ago, I proposed to my writing partner Lloyd Evans that we write a modern version of The Man Who Came to Dinner, Kaufman and Hart’s classic comedy. In the original, a famous literary critic is invited to dine at the house of a rich industrialist, injures his hip on the front steps and ends up staying for several weeks. The tycoon and his family are initially tickled pink to have such a distinguished house guest, but the scales gradually fall from their eyes as they realise what a monstrous egotist he is. In our version, the literary critic would become a philanthropic rock star, but otherwise we would stick closely to the original.

We were quite enthusiastic about it for a while, but in the end concluded that sending up Bono was just too easy. It would be like writing a play in which we drew attention to Gordon Brown’s dark side or Ed Balls’s lust for power. Not exactly ground-breaking stuff. You can’t knock someone off their pedestal if they’re grovelling around in the dirt, looking for pennies to pinch.

Still, even we didn’t imagine he would stoop to something quite this low. ($184,732 to good causes, $8,000,000 on salaries!) If we do decide to revive our idea, at least we have an ending. It will consist of the gabby Irish chancer wagging his finger at the audience, urging them to make poverty history, as he descends into the fires of hell.

[Update: The ONE foundation has put out a statement saying that it does not fundraise from the public but is funded “almost entirely by a handful of philanthropists on our board of directors” to raise awareness to fight extreme poverty.]