Just a waste of money or do they know something that you don’t?

Hundreds of police officers undertook a three-day course on how to deal with powerful earthquakes even though Britain has never experienced any such event. 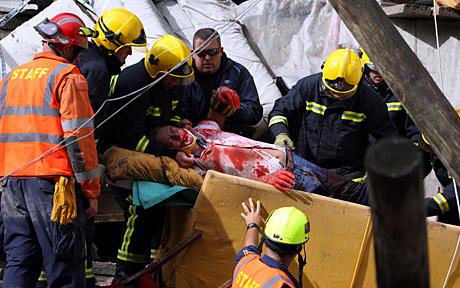 Britain endures its fair share of elemental hardships: floods, storms, and even the occasional tornado. It is not, however, known for its high risk of catastrophic earthquakes.

But that did not stop police officers undertaking a three-day course training them to deal with a devastating tremor.

Officers from four British forces participated in the £826,000 exercise that simulated the consequences from a tremor measuring eight on the Richter scale hitting the country – something that has never happened and probably never will.

The teams were called in to work with European and Middle Eastern officials for the “extremely unlikely” crisis.

Hundreds of actors were also employed to recreate the mock disaster scenes across the country.

Critics suggested the three day exercise, one of the largest ever undertaken, was a waste of valuable resources as it would almost never occur in Britain.

Senior officials, however, felt it “necessary” to be prepared for such an “unthinkable” event despite just 11 people dying from earthquakes in Britain over the past 1000 years.

This week’s EU-funded project, code-named Exercise Orion, simulated emergency services rescuing people caught up in the disaster. In one “real life event”, up to 600 casualties were rescued from the town of “Widley”, Hants.

That disaster, recreated near Portsmouth, caused motorways and apartment blocks to collapse, oil storage plants to be damaged and cars to start burning.

Under the scenario, British emergency services were soon overwhelmed and the Cabinet Office issued an appeal for European Union assistance.

Other mock earthquake scenes, involving hundreds of fire fighters, ambulance crews and a fleet of helicopters were held in Hertfordshire, Gloucestershire and Merseyside.

An eight-magnitude quake is classed as a “great earthquake”, which causes “serious damage in areas several hundred miles across”. There are only one recorded every year throughout the world.

“It’s all very well and good preparing for a giant earthquake, but in the end you might as well plan for a meteor strike or a volcano,” said one police officer, who did not want to be named.

“It just seems like a lot of manpower being used to deal with something which is not just extremely unlikely, but dare I say impossible.”

Pete Crook, of Hampshire Fire and Rescue Service, defended the project, which prepared authorities for “the unthinkable”.

“Exercise Orion is deliberately being organised to challenge all teams to the limit,” he said.

“That is why we have chosen the unlikely scenario of an earthquake, because the UK is not accustomed to such incidents and it is therefore outside all normal planning assumptions.”

The last “major” tremor to hit the UK was one measuring 5.2 on the Richter scale which hit Lincolnshire in February 2008 and injured one man who broke his pelvis.

According to the British Geological Society there are between 200 and 300 earthquakes every year in the UK with just 11 people dying when records began in 974.

The strongest British earthquake was the 1931 Dogger Bank earthquake, which measured 6.1 on the Richter scale.

One woman in Hull died after suffering a heart attack and the head of the waxwork of Dr Crippen fell off at Madame Tussauds.