An Arizona sheriff is being sued by the US Justice Department after refusing to hand over records for a year into an investigation into allegations his department discriminates against Hispanics. 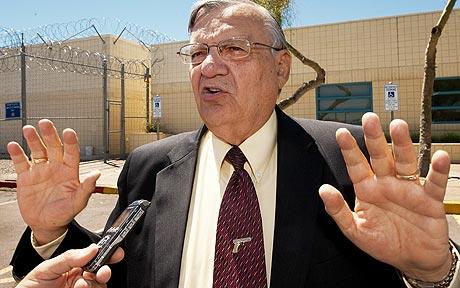 The lawsuit claims that they have been trying since March last year to get Sheriff Joe Arpaio and officials to comply with its investigation of alleged discrimination and unconstitutional searches and seizures.

Sheriff Arpaio called the actions harassment, adding that his office will not hand over additional documents because the federal authorities have not said exactly what they are investigation.

The lawsuit is the latest action against Arizona by the federal government, which earlier sued the state to stop its strict new immigration law that requires police officers to question people about their immigration status if there is reason to suspect they are in the country illegally.

“The actions of the sheriff’s office are unprecedented,” said Thomas Perez, assistant attorney general for the department’s civil rights division. “It is unfortunate that the department was forced to resort to litigation to gain access to public documents and facilities.”

The lawsuit said the department is investigating police practices and jail policies but did not specify the documents sought in its dozens of requests. It was filed in US District Court in Phoenix and names Sheriff Arpaio, the Maricopa County Sheriff’s Office and the county.

Sheriff Arpaio denies allegations of racial profiling, saying people are stopped if deputies have probable cause to believe they have committed crimes and that it is only afterward that deputies find many of them are illegal immigrants.

The sheriff’s office has said half of the 1,032 people arrested in the sweeps have been illegal immigrants.

Last year, the federal government stripped Sheriff Arpaio of his special power to enforce federal immigration law. The sheriff continued his sweeps through the enforcement of state immigration laws.