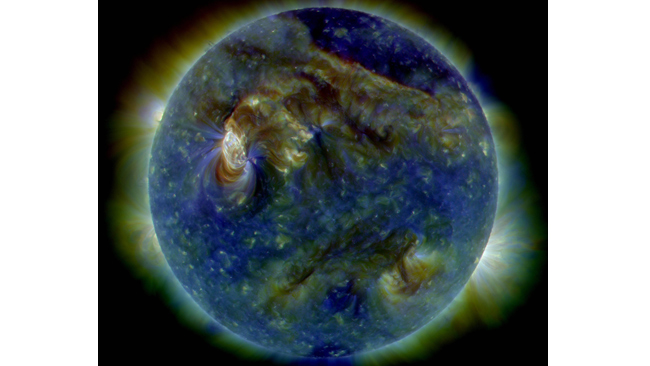 The first solar storm of this cycle hit the Earth early this month, causing it to light up spectacularly / NASA Source: NASA

AFTER 10 years of comparative slumber, the sun is waking up – and it’s got astronomers on full alert.

This week several US media outlets reported that NASA was warning the massive flare that caused spectacular light shows on Earth earlier this month was just a precursor to a massive solar storm building that had the potential to wipe out the entire planet’s power grid.

NASA has since rebutted those reports, saying it could come “100 years away or just 100 days”, but an Australian astronomer says the space community is betting on the sooner scenario rather than the latter.

Despite its rebuttal, NASA’s been watching out for this storm since 2006 and reports from the US this week claim the storms could hit on that most Hollywood of disaster dates – 2012.

Similar storms back in 1859 and 1921 caused worldwide chaos, wiping out telegraph wires on a massive scale.

The 2012 storm has the potential to be even more disruptive.

“The general consensus among general astronomers (and certainly solar astronomers) is that this coming Solar maximum (2012 but possibly later into 2013) will be the most violent in 100 years,” astronomy lecturer and columnist Dave Reneke said.

“A bold statement and one taken seriously by those it will affect most, namely airline companies, communications companies and anyone working with modern GPS systems.

“They can even trip circuit breakers and knock out orbiting satellites, as has already been done this year.”

Regardless, the point astronomers are making is it doesn’t matter if the next Solar Max isn’t the worst in history, or even as bad as the 1859 storms.

It’s the fact that there hasn’t been one since the mid-80s. Commodore had just launched the Amiga and the only digital storm making the news was Tetris.

No one really knows what effect the 2012-2013 Solar Max will have on today’s digital-reliant society.

US government officials earlier this year took part in a “tabletop exercise” in Boulder, Colorado, to map out what might happen if the Earth was hit with a storm as intense as the 1859 and 1921 storms.

The 1859 storm was of a similar size to that predicted by NASA to hit within the next three years – one of decreased activity, but more powerful eruptions.

NASA said that a recent report by the National Academy of Sciences found that if a similar storm occurred today, it could cause “$1 to 2 trillion in damages to society’s high-tech infrastructure and require four to 10 years for complete recovery”.

Staff at the Space Weather Prediction Center in Colorado, which hosted the exercise, said with our reliance on satellite technology, such an event could hit the Earth with the magnitude of a global hurricane or earthquake.

The reason for the concern comes as the sun enters a phase known as Solar Cycle 24.

All the alarming news building around the event is being fuelled by two things.

The first is a book by disaster expert Lawrence E. Joseph, Guilty of Apocalypse: The Case Against 2012, in which he claims the “Hurricane Katrina for the Earth” may cause unprecedented planetwide upheaval.

The second is a theory that claims sunspots travel through the sun on a “conveyor belt” similar to the Great Ocean Conveyor Belt which controls weather on Earth.

The belt carries magnetic fields through the sun. When they hit the surface, they explode as sunspots.

Weakened, they then travel back through the sun’s core to recharge.

It all happens on a rough 40-50-year cycle, according to solar physicist David Hathaway of the National Space Science and Technology Center in the US.

He says when the belt speeds up, lots of magnetic fields are collected, which points to more intense future activity.

“Old magnetic fields swept up then should reappear as big sunspots in 2010-2011.”

Most experts agree, although those who put the date of Solar Max in 2012 are getting the most press.

They claim satellites will be aged by 50 years, rendering GPS even more useless than ever, and the blast will have the equivalent energy of 100 million hydrogen bombs.

“We know it is coming but we don’t know how bad it is going to be,” Dr Fisher told Mr Reneke in the most recent issue of Australasian Science.

“Systems will just not work. The flares change the magnetic field on the Earth and it’s rapid, just like a lightning bolt.