Rivers choked with islands of debris after recent floods, threatening to block floodgates of dams and topple bridges.

Vast floating islands of rubbish and debris, accumulated after torrential rains and flooding, are threatening to topple a bridge and jam two big dams in China, state media reported on Wednesday.

One layer of garbage covering 15,000sq m – had lodged under a bridge in the north-eastern city of Baishan in Jilin province and was blocking water flow, the China Daily reported.

Officials fear a fresh wave of flooding, if crews fail to clear the debris, could bring down the bridge. If the island is washed downstream, it could block floodgates at the Yunfeng dam, now operating at full capacity.

Emergency services were scrambling to clean up the waterway, near the border with North Korea, but fear it could take days.

“We have collected 40 trucks of the trash, but the remaining trash might fill another 200 trucks,” the official Xinhua agency quoted police officer Wang Yong as saying. 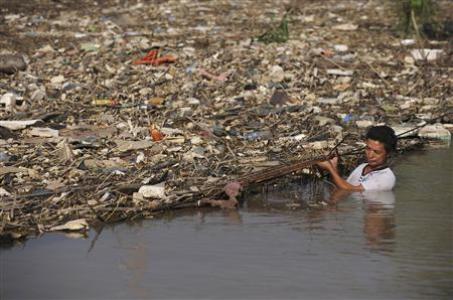 A worker clears floating garbage washed down by recent torrential rain on the Yangtze River in Wuhu, Anhui province, August 2, 2010.

BEIJING (Reuters) – Thousands of tons of garbage washed down by recent torrential rain are threatening to jam the locks of China’s massive Three Gorges Dam, and is in places so thick people can stand on it, state media said on Monday.

Chen Lei, a senior official at the China Three Gorges Corporation, told the China Daily that 3,000 tons of rubbish was being collected at the dam every day, but there was still not enough manpower to clean it all up.

“The large amount of waste in the dam area could jam the miter gate of the Three Gorges Dam,” Chen said, referring to the gates of the locks which allow shipping to pass through the Yangtze River.

The river is a crucial commercial artery for the upstream city of Chongqing and other areas in China’s less-developed western interior provinces.

Pictures showed a huge swathe of the waters by the dam crammed full of debris, with cranes brought in to fish out a tangled mess, including shoes, bottles, branches and Styrofoam.

Some 50,000 square meters of water (more than half a million square feet) had been covered by trash washed down since the start of the rainy season in July, the report said. The trash is around 60 centimeters (two feet) deep, and in some parts so compacted people can walk on it, the Hubei Daily added.

“Such a large amount of debris could damage the propellers and bottoms of passing boats,” Chen said, “The decaying garbage could also harm the scenery and the water quality.”

The Three Gorges Dam is the world’s largest hydropower project, and was built partly to tame flooding along the Yangtze, which killed over 4,000 people in 1998 and countless more over the centuries.

Enormously expensive and disruptive, the dam has cost over 254 billion yuan ($37.5 billion) and forced the relocation of 1.3 million people to make way for the reservoir. Towns, fields and historical and archaeological sites have been submerged.

Environmentalists have warned for years that the reservoir could turn into a cesspool of raw sewage and industrial chemicals backing onto nearby Chongqing city, and feared that silt trapped behind the dam could cause erosion downstream.

China has made scant progress on schemes drawn up nearly a decade ago to limit pollution in and around the reservoir.