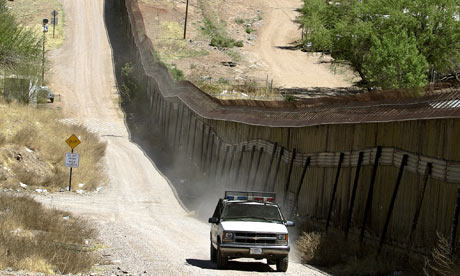 The fence on the US-Mexico border. (AP)

About 1,200 soldiers from the US National Guard are to be deployed along the border with Mexico from 1 August to try to tackle the twin problems of illegal immigration and drug-smuggling.

About half of the troops are to be sent to Arizona, which is at the centre of the national debate over illegal immigration. The state is planning to introduce a law next week to crack down on people entering unlawfully.

There is a 30ft steel fence running along much of the US border, including the section that runs through Arizona, but much of the area is so remote that those crossing illegally can easily put up ladders and climb over. Drug cartels are even more brazen, occasionally ramming the fence in heavily armoured jeeps.

Border guards tend to be deployed not along the border but half a mile or more back, monitoring crossings with a view to picking up illegal immigrants later. The troops Obama is sending will concentrate on patrolling the fence.

Senators from Arizona, as well as the state’s governor, have been calling for more troops, arguing that their presence along the fence will help dissuade those crossing illegally. But state leaders in Arizona said that the deployment was too little, too late.

As well as the 1,200 members of the National Guard that Obama is sending, an extra 300 customs and border protection agents are also to be deployed. Of the National Guard, 524 will go to Arizona – which acts as funnel for illegal immigration, partly because of its remoteness and lack of population – 250 to Texas, 224 to California and 72 to New Mexico.

Jan Brewer, the governor of Arizona, said: “While the announcement of more resources is welcomed, it does not appear to be enough. We need the implementation of a federal plan to achieve victory over these brutal cartels and the porous nature of our open border.”

In a joint statement, John McCain and Jon Kyl, the two Arizona senators, both Republicans, said dispatching soldiers and additional agents is “a step in the right direction. However, a lot more needs to be done.”

Brewer claims that because of the failure of the federal government to secure the border, the state has had to bring in its own law. Feelings in Arizona were exacerbated in March with the killing near the border of a rancher, Robert Krentz. The murder was blamed on Mexican drug smugglers.

Arizona has divided the nation with its law, which is due to come into effect on Thursday week. It will give the police the right to ask anyone who is stopped whether they are an illegal immigrant. Groups representing Hispanic Americans argue that this will lead to racial profiling by the police.

The approach to illegal immigration in the US is more complicated than in Europe. There are an estimated 12-20 million illegal immigrants, mainly Hispanics. The country is heavily dependent on them to do many of the jobs US citizens do not want to do. But at the same time there is opposition, mainly among conservatives, pointing out that immigrants broke the law by coming over the border. They are also fearful about the growing dominance of Latino culture in the US.

The Obama administration is to begin a court action against the Arizona state government on Thursday, claiming that the its law is unconstitutional. The move is being backed by civil rights groups and nine Latin American countries.