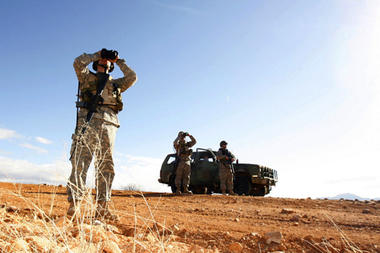 Soldiers watch for criminal activity in the US-Mexico border.

SACRAMENTO, Calif. — Gov. Arnold Schwarzenegger on Friday mobilized members of the California National Guard as part of a federal effort to deter drug trafficking and illegal immigration along the border with Mexico.

The move comes amid a national debate over an Arizona law that directs police to conduct immigration checks when they are questioning people about possible legal violations. There must be a “reasonable suspicion” the person is in the country illegally.

Obama asked California to deploy 224 Guard members for as long as a year, but California National Guard spokesman Lt. Patrick Bagley said as many as 260 soldiers and airmen will head to the border by Oct. 1.

The higher number is because California has more members qualified to perform the specific duties needed to support federal border protection, customs and immigration agents, Bagley said. The number and assignments resulted from talks with officials in other states and the federal government.

The California soldiers and airmen — all of whom have volunteered for the mission — will be selected by mid-August. They will get up to three weeks of training in August or September, expanding on routine training they already receive.

California is responsible for its entire border with Mexico, but Bagley said the Guard members will be assigned to specific locations as needed based on discussions with federal officials.

It’s the second time Schwarzenegger has ordered Guard members to the border. He backed a similar federal effort in June 2006. Guard members will be based in many of the same armories they used the last time, Bagley said.