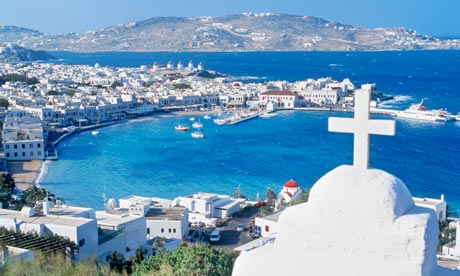 Greece is raising cash by selling off an area of state-owned land on Mykonos for luxury tourism.

There’s little that shouts “seriously rich” as much as a little island in the sun to call your own. For Sir Richard Branson it is Neckar in the Caribbean, the billionaire Barclay brothers prefer Brecqhou in the Channel Islands, while Aristotle Onassis married Jackie Kennedy on Skorpios, his Greek hideway.

Now Greece is making it easier for the rich and famous to fulfill their dreams by preparing to sell, or offering long-term leases on, some of its 6,000 sunkissed islands in a desperate attempt to repay its mountainous debts.

The Guardian has learned that an area in Mykonos, one of Greece’s top tourist destinations, is one of the sites for sale. The area is one-third owned by the government, which is looking for a buyer willing to inject capital and develop a luxury tourism complex, according to a source close to the negotiations.

Potential investors also looking at property on the island of Rhodes, are mostly Russian and Chinese. Investors in both countries are looking for a little bit of the Mediterranean as holiday destinations for their increasingly affluent populations. Roman Abramovich, the billionaire owner of Chelsea football club, is among those understood to be interested, although a spokesman denied he was about to invest.

Greece has embarked on the desperate measures after being pushed into a €110bn (£90bn) bailout by the EU and the IMF last month, following a decade of overspending and after jittery investors raised borrowing costs to unbearable levels.

The sale of an island – or convincing a member of the international jet-set to take on a long-term lease – would help to boost its coffers. The Private Islands website lists 1,235-acre Nafsika, in the Ionian sea, on sale by private interests for €15m. But others are on offer by private owners for less than €2m – less than a townhouse in Mayfair or Chelsea. Some of the country’s numerous islands are tiny which could barely fit a single sunbed.

Only 227 Greek islands are populated and the decision to press ahead with potential sales has also been driven by the inability of the state to develop basic infrastructure, or police most of its islands. The hope is that the sale or long-term lease of some islands will attract investment that will generate jobs and taxable income.

Told by the Guardian that such sales or leases were in prospect, Makis Perdikaris, director of Greek Island Properties, said that he would be unhappy at the prospect of any outright sale of state land: “I am sad – selling off your islands or areas that belong to the people of Greece should be used as the last resort,” he said. But he was not necessarily against long-term leases: “The first thing is to develop the economy and attract foreign domestic investment to create the -necessary infrastructure. The point is to get money.”

In its battle to raise funds, the country is also planning to sell its rail and water companies. Chinese investors are understood to be interested in the Greek train system, as they already control some of the ports. In a deal announced earlier this month, the Greek government also agreed to export olive oil to China.

After the socialist government of prime minister Geórgios Papandreou responded to the IMF bailout with draconian budget cuts, rioters took to the streets, costing three lives in May.

In the midst of the crisis, the German chancellor, Angela Merkel, delayed her support as she faced local elections and popular opposition to any public-funded help to Greece.

As strikes almost paralysed the country and hedge funds bet against the economy, German politicians called for Greece to start selling islands, historic buildings and artworks. It now appears that the Greek government has heeded their demands.

The City, where investors are increasingly shunning Greek investments, welcomed any island sales. “It’s a shame if it has come to this but it does at least demonstrate that Greece is prepared to take all actions necessary to try and meet its obligations,” said Gary Jenkins, a credit analyst at Evolution Securities.

Property prices have fallen between 10% and 20% since the May riots in Athens, as bad publicity has drawn visitors away, Perdikaris said.

“We have experienced a very slow booking season. Most tour operators offer hugely discounted rates,” he said. Britons account for more than 60% of his company’s property sales.