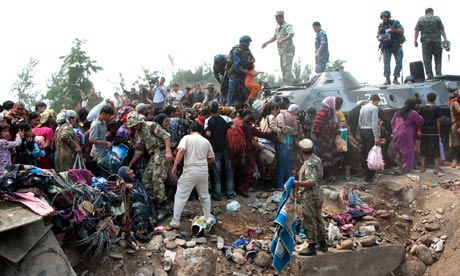 “This is an internal conflict and Russia does not yet see the conditions for its participating in resolving it,” Natalya Timakhova was quoted by Russian news agencies as saying.

A decision to dispatch peacekeepers could be taking only after consultations with the United Nations, she added.

The provisional government — which seized control in April — is struggling to halt a descent into civil war between ethnic Kyrgyz and Uzbeks in the south of the country.

The second state of emergency in the southern city of Jalalabad was necessary because “instability is spreading,” Deputy Interim Minister Azimbek Beknadzarov declared on national television.

Earlier, Beknazarov had appealed to retired police and army officers to go to the region of Osh to try to halt the violence.

“The authorities will be grateful for any volunteers who are ready to help prevent civil war in the south of Kyrgyzstan,” he said, the 24.kg news agency reported.

Violence erupted in the Osh region overnight to Friday when brawls between Kyrgyz and Uzbeks escalated into running street battles, prompting the government to impose a curfew and state of emergency.

Cars were smashed and burned, and buildings set on fire.

In panic, thousands of Uzbek women and children have fled to the nearby border with Uzbekistan, an AFP reporter witnessed, raising the spectre of a humanitarian crisis.

Witnesses said some refugees were being accepted to hospitals across the border at a few check points, though others remained shut.

“We don’t want any wars with the Kyrgyz people … but we are suffering from their actions,” an elderly Uzbek woman, who did not give her name, said at a border crossing near the Kyrgyz village of Markhamat.

“They are shooting us, killing us.”

People reached by telephone in Osh described an increasingly violent and chaotic situation, with gunfire echoing across the city amid what seems to be a near-total collapse of central authority.

“The situation here looks terrible. The government doesn’t have any more control over the city. It’s war,” said Andrea Berg of Human Rights Watch, who has been trapped in a guest house in Osh since the fighting began.

“There is no way for a safe passage out to the airport and the Uzbek neighbourhoods are burning,” the researcher said.

“Shootings everywhere. Horrible phone calls from people locked in these mahallas (Uzbek neighbourhoods) seeing how their neighbours are being slaughtered.”

Unrest had also spread to the northern capital Bishkek, where one medical official told AFP that 27 people had been hospitalised Friday.

Ethnic Kyrgyz protesters there have commandeered cars and minibuses to travel south to Osh, the Kabar news agency reported.

Since last April’s uprising, which ousted president Kurmanbek Bakiyev and left 87 people dead, foreign leaders have warned of the danger of civil war in the strategically vital state, which hosts US and Russian military bases.

The United States, whose air base outside the capital Bishkek is critical to its war in Afghanistan, has called for a swift return to order.