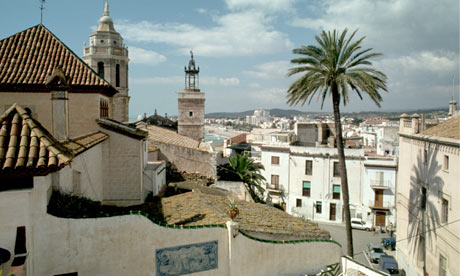 Sitges in Catalonia, where a Bilderburg beach party and ‘awareness camp’ are planned.

Another year, another Bilderberg. The first “participants” (as the delegates are known) won’t be arriving until Thursday, but already the Hotel Dolce in Sitges is buzzing with anticipation. This Catalan seaside town hasn’t hosted an event as large and politically sensitive as Bilderberg since the legendary 2008 Foam Party at the Mr Gay Sitges awards night.

Last year, Bilderberg was held in Vouliagmeni, on the coast just south of Athens. The Greek minister of finance attended, the minister of foreign affairs, and the governor of the National Bank of Greece. A few months later, Greece was bankrupt and Athens was in flames. So … good luck, Madrid!

Police are already stretching their red stripy tape around the hotel, and zipping up and around the local roads in their squad cars, sniffing for trouble. I’m really hoping there’s none to find. The Spanish are promising a beach party and an “awareness camp”, with political discussion forums and meditation zones.

I plan to spend at least part of Friday sitting cross-legged in a campsite, sending beams of white light up the hill and into the hotel. Feel my love, Marcus Agius – Chairman of Barclays and senior non-executive director on the BBC’s new executive board. Let it surround you, Queen Sofia of Spain. Don’t fight it, president of the World Bank. You can’t beat the love.

It would be nicer if the interface between Bilderberg and the world could be softer – if it could turn an open face towards us, rather than the barrel of a machine gun. What I’m hoping is that this year, in the all-new CamCleggian spirit of openness and political transparency, any British elected official who attends the meeting – and I’m talking to you, Kenneth Clarke and George Osborne – will tell us they attended, tell us what they spoke about, and tell us what the next 12 months has in store. I don’t think that’s too much to ask.

Not that anyone is really asking. I’ve come along again this year because I had the horrible, nagging thought that no other journalists would.

Not that I’m a proper journalist. Hardly: consider me an interested citizen of the world come to bear witness to a peculiar, important, and unsettling event.

For a long and luxurious weekend at the Dolce Sitges, relishing its “new and creative buffet concepts” (a table with food on it), prime ministers will mingle with European royalty, with various EU commissioners, with representatives from Goldman Sachs, Microsoft, AIB, Deutsche Bank, Chase Manhattan and Royal Dutch Shell.

They’ll clink glasses with President Obama’s special envoy to Afghanistan and Pakistan, Richard Holbrooke (he is confirmed for this year). And join the Friday night conga line behind the US treasury secretary (Tim Geithner went last year; he goes a lot). We can reasonably expect the head of the Federal Reserve, the president of the World Bank, the secretary general of Nato … they’ve all attended in the past and many will attend again. So yes, important it is; to think otherwise is painfully naive (see below for the usual “just a big boys’ club” comments …)

The conference hotel may be perched above a golf course, and boast two ping pong tables, but this four-day event isn’t about who is better at table tennis, Ken Clarke or David Rockefeller (it’s Rockefeller). This is about big business, global financial strategy and the economic future of Europe … if indeed it has one.

And most importantly, this four-day event doesn’t start until tomorrow – and continues all the way through the weekend – so if you’re a PROPER journalist reading this, or a blogger, or simply a curious citizen of a Europe teetering on the edge, then come along. Please come. I’ll buy you a Catalan beer. I recommend the Rosita. It’s fruity but ballsy – not unlike the winner of Mr Gay Sitges 2008.