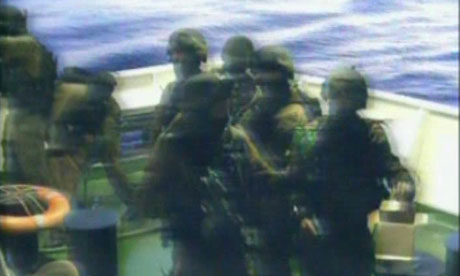 While the United States has reserved judgment in the matter, a former Mossad agent is casting blame for the botched raid on a Gaza aid flotilla, pointing directly at Israeli Prime Minister Binyamin Netanyahu for allegedly ordering forces to act without vital preparation.

The former Mossad agent is Victor Ostrovsky, who enlisted in the Israeli Defense Force at age 18 and has since written two books highly critical of Israel’s war-fighting apparatus. His first book, “By Way of Deception,” illustrates the brutal and often confusing nature of the Israeli spy service’s covert operations, casting the agency as a villain that engages in the drug trade to further their ambitions over the good of Israel. His other book, “The Other Side of Deception,” speculates as to Mossad’s greater agenda. The book is available online in its entirety.

If one were to ask him, he’d say that Israel’s raid on the Gaza aid flotilla was “so stupid it’s stupefying” — exactly the words he used speaking with Washington Post “Spy Talk” columnist Jeff Stein.

For one, Ostrovsky suggested, commandos could have approached the ship from under water and disabled the propellers, letting the activists drift for days until their food supplies ran out. He added that Israeli soldiers should not have fast-roped into a crowd as they had, instead suggesting that it would have been more productive to board the ship from the front and back, then work inward.

“The mistakes were on every level,” Ostrovsky told Stein, “from the order to forcefully board outside the territorial waters to the actual attack.”

He ultimately blamed the Israeli prime minister for giving an order to “do something now” instead of making adequate preparations for repelling the vessel from the Gaza shore. He also chastised the Israeli leadership for stopping the boat in international waters, even if its stated destination was beyond the military blockade.

US officials take no immediate stance on Gaza flotilla raid

Asked if President Barack Obama condemned Israel for the raid, White House spokesman Robert Gibbs stuck to the language of a UN Security Council statement issued late Sunday on the Israeli assault on a convoy headed to Gaza.

The statement condemns “those acts which resulted in the loss of at least ten civilians and many wounded,” but did not specifically say whether the Israeli raid or actions of pro-Palestinians supporters caused the violence.

“Let me simply restate what the international community and the United States supported early this morning at the UN Security Council through a presidential statement,” Gibbs said.

“The Security Council statement that I read calls for an investigation that is prompt, impartial, credible and transparent, conforming to international standards, of exactly what happened,” Gibbs said. “And we’re obviously supportive of that.”