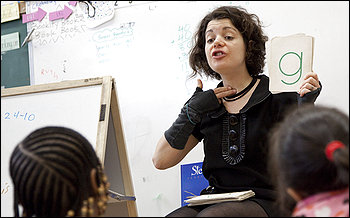 “Higher-needs schools are hit inequitably” by the cuts, says Jennifer Moless, a kindergarten teacher in San Francisco. Moless has been pink-slipped but has also been told she’s likely to get a reprieve. (Randi Lynn Beach For The Washington Post)

Senior congressional Democrats and the Obama administration scrambled Wednesday to line up support for $23 billion in federal aid to avert an estimated 100,000 or more school layoffs in a brutal year for education budgets coast to coast.

As early as Thursday, the House Appropriations Committee expects to take up a bill that couples the school funding with spending for the Afghanistan war — a measure that has bipartisan support. But a parallel push in the Senate stalled this week after a leading proponent concluded that he couldn’t muster enough votes to surmount Republican opposition.

“We desperately need Congress to act — to recognize the emergency for what it is,” Education Secretary Arne Duncan said Wednesday on Capitol Hill. “We have to keep hundreds of thousands of teachers teaching.”

Republicans and some Democrats say the government can’t afford an extension of last year’s economic stimulus that would add to the federal deficit. The stimulus law kept many school budgets afloat with $49 billion in direct aid to states and billions of dollars more for various programs. But the stimulus funding is trailing off before state and local tax revenue can recover from the recession.

Skeptics of a new education jobs fund point out that the teaching force in recent years has grown faster than enrollment, with schools adding instructional coaches and reducing class sizes.

“Giving states another $23 billion in federal education money simply throws more money into taxpayer-funded bailouts when we should be discussing why we aren’t seeing the results we need from the billions in federal dollars that are already being spent,” said House Minority Leader John A. Boehner (R-Ohio).

How many of the estimated 3.3 million public school teachers nationwide will lose their jobs remains unknown. Duncan often says 100,000 to 300,000 education jobs are at risk, including support staff. Teachers unions have put the layoff threat in the range of 160,000 — including 9,000 in New Jersey, 16,000 in New York and 36,000 in California.

The National Education Association, the largest teachers union, said Wednesday that it is funding TV ads in markets that are home to potential swing votes among House Democrats. The ad features children dressed in business suits pleading for a school bailout similar to what bankers received.

If the House approves the measure, proponents hope to overcome Senate obstacles. Sen. Tom Harkin (D-Iowa) had expected to offer the school funding proposal for a Senate vote but dropped that plan Tuesday. Harkin said he had majority support but not the 60 votes needed to beat a filibuster. He said he would seek to include school aid in a final version of the war spending bill negotiated with the House.

Proponents say they also may need President Obama to speak out and twist arms on Capitol Hill on behalf of schools.

Deficit spending has become a tougher political sell since enactment of the stimulus law early in Obama’s term. Democrats are on the defensive in an election year, and the president has signaled that he wants to do more to rein in spending.