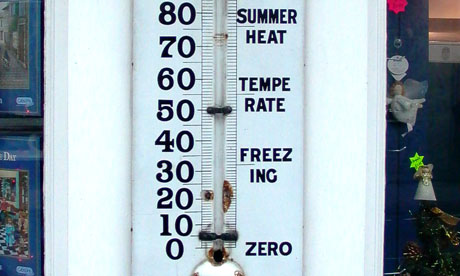 Widespread frost is forecast for much of the country tonight. (Guardian)

The famously bracing seaside resort of Skegness managed an overnight temperature of -1C, snow flakes fluttered down on Tyneside, and with more snow forecast for the Scottish highlands an new bedding plants likely to cringe in a widespread frost across much of the country tonight, it could be another week before the weather warms up to anywhere near the seasonal norm.

Maximum daytime temperature in the south east is expected to be no higher than 13C, at least four centigrade lower than average for May.

“Snow in May is not unheard of but it is cold for this time of year,” Tiffany Curnick, a forecaster with the Press Association’s MeteoGroup, said. “Milder air is coming in from the west, but we will still see maximum temperatures in the mid-teens in the south and the low-teens in the north for the rest of the week, which is still quite chilly for May.”

The prolonged cold weather is a nightmare for horticulturists and designers trying to ensure that every bloom is at an impossible height of perfection for the Chelsea flower show which opens in 13 days time. The organisers have already warned that the coldest winter in a lifetime, followed by a very late spring and the present cold snap, could affect some of the plants on display.

The weather, and the prospect of night frosts, is also bad news for the millions who followed tradition in flocking over the bank holiday weekend to buy bedding plants.