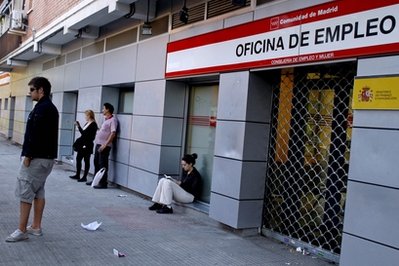 The number of unemployed jumped by 280,200 to 4.61 million, more than in Germany which has nearly twice Spain’s population, for a jobless rate of 20.05 percent. The unemployment rate rose from 18.83 percent in the fourth quarter.

The last time the unemployment rate topped 20 percent in Spain was in the fourth quarter of 1997 when it hit 20.11 percent.

Spain’s jobless rate has soared since the global credit crisis hastened the collapse of its labour-intensive construction industry at the end of 2008.

The country has the highest unemployment rate in the 16-nation eurozone and accounts for half the region?s job losses over the last two years, according to the European Union?s statistics office Eurostat.

The rise in unemployment during the first quarter means Spain’s socialist government, which has vowed to protect social welfare spending, will face an even bigger bill for jobless benefits as it tries to rein in a public deficit that hit 11.2 percent of Gross Domestic Product last year.

“We now believe that the Spanish economy’s shift away from credit-fueled economic growth is likely to result in a more protracted period of sluggish activity than we previously assumed,” S&P’s credit analyst Marko Mrsnik said.

The Spanish economy, Europe’s fifth largest, contracted 0.1 percent in the fourth quarter from the previous three months, even as the entire eurozone, the United States and Japan emerged from recession.

Spain has proved especially vulnerable to the global credit crunch because growth relied heavily on credit-fuelled domestic demand and a property boom boosted by easy access to loans that has collapsed.

French investment bank Natixis estimates that prior to the crisis 30 percent of Spain’s working population worked directly or indirectly for the construction industry.

In January Zapatero unveiled a 50 billion euro austerity plan intended to bring the public deficit to within a eurozone limit of 3.0 percent by 2013.

– Warning For Britain As Financial Chaos Spreads to Spain