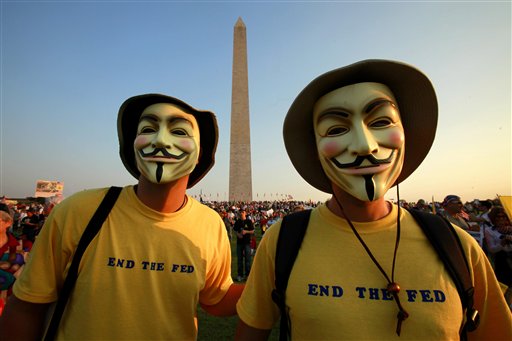 FILE – In this April 15, 2010 file photo, two men who asked to be called only, “Guy Fawkes,” attend a tea party rally at the Washington Monument in Washington. Can you trust Washington? Nearly 80 percent of Americans say they can’t and they have little faith in the massive federal bureaucracy solving the nation’s ills, according to a new survey from the Pew Research Center that shows confidence in the federal government at one of the lowest points in half century. (AP Photo/Jacquelyn Martin, File)

Public confidence in government is at one of the lowest points in a half century, according to a survey from the Pew Research Center. Nearly 8 in 10 Americans say they don’t trust the federal government and have little faith it can solve America’s ills, the survey found.

The survey illustrates the ominous situation President Barack Obama and the Democratic Party face as they struggle to maintain their comfortable congressional majorities in this fall’s elections. Midterm prospects are typically tough for the party in power. Add a toxic environment like this and lots of incumbent Democrats could be out of work.

The survey found that just 22 percent of those questioned say they can trust Washington almost always or most of the time and just 19 percent say they are basically content with it. Nearly half say the government negatively effects their daily lives, a sentiment that’s grown over the past dozen years.

This anti-government feeling has driven the tea party movement, reflected in fierce protests this past week.

“The government’s been lying to people for years. Politicians make promises to get elected, and when they get elected, they don’t follow through,” says Cindy Wanto, 57, a registered Democrat from Nemacolin, Pa., who joined several thousand for a rally in Washington on April 15 — the tax filing deadline. “There’s too much government in my business. It was a problem before Obama, but he’s certainly not helping fix it.”

Majorities in the survey call Washington too big and too powerful, and say it’s interfering too much in state and local matters. The public is split over whether the government should be responsible for dealing with critical problems or scaled back to reduce its power, presumably in favor of personal responsibility.

About half say they want a smaller government with fewer services, compared with roughly 40 percent who want a bigger government providing more. The public was evenly divided on those questions long before Obama was elected. Still, a majority supported the Obama administration exerting greater control over the economy during the recession.

“Trust in government rarely gets this low,” said Andrew Kohut, director of the nonpartisan center that conducted the survey. “Some of it’s backlash against Obama. But there are a lot of other things going on.”

And, he added: “Politics has poisoned the well.”

The survey found that Obama’s policies were partly to blame for a rise in distrustful, anti-government views. In his first year in office, the president orchestrated a government takeover of Detroit automakers, secured a $787 billion stimulus package and pushed to overhaul the health care system.

But the poll also identified a combination of factors that contributed to the electorate’s hostility: the recession that Obama inherited from President George W. Bush; a dispirited public; and anger with Congress and politicians of all political leanings.

In the short term, the deepening distrust is politically troubling for Obama and Democrats. Analysts say out-of-power Republicans could well benefit from the bitterness toward Washington come November, even though voters blame them, too, for partisan gridlock that hinders progress.

In a democracy built on the notion that citizens have a voice and a right to exercise it, the long-term consequences could prove to be simply unhealthy — or truly debilitating. Distrust could lead people to refuse to vote or get involved in their own communities. Apathy could set in, or worse — violence.

Democrats and Republicans both accept responsibility and fault the other party for the electorate’s lack of confidence.

“This should be a wake-up call. Both sides are guilty,” said Sen. Claire McCaskill, D-Mo. She pointed to “nonsense” that goes on during campaigns that leads to “promises made but not promises kept.” Still, she added: “Distrust of government is an all-American activity. It’s something we do as Americans and there’s nothing wrong with it.”

Sen. Scott Brown, a Republican who won a long-held Democratic Senate seat in Massachusetts in January by seizing on public antagonism toward Washington, said: “It’s clear Washington is broken. There’s too much partisan bickering to be able to solve the problems people want us to solve.”

And, he added: “It’s going to be reflected in the elections this fall.”

But Matthew Dowd, a top strategist on Bush’s re-election campaign who now shuns the GOP label, says both Republicans and Democrats are missing the mark.