“The lawsuit claims Father Fiala gave the teen a ride in a church truck to Big Spring for the teen to visit his girlfriend but stopped at a San Angelo Motel 6. There, he raped the teen at gunpoint in a room and said, “If you tell anyone what happened, I will hurt you and your family,” according to the suit.

On other occasions, the priest manipulated the teen into performing oral sex, once by leveraging his gift of a car and another time pulling a revolver on him, according to the suit.

The teen eventually ran away from home and attempted suicide, the suit says. A school counselor learned of the alleged abuse and contacted the Sheriff’s Office.” 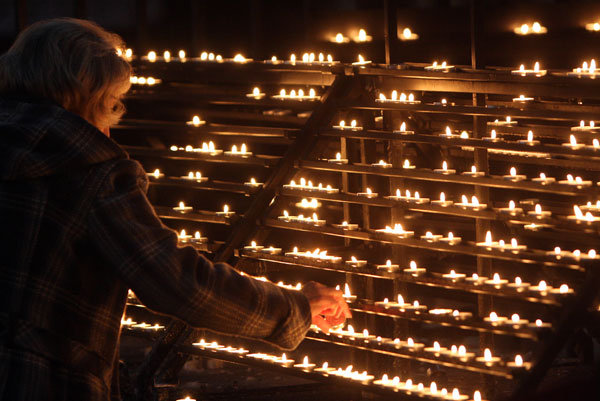 A Catholic priest from a rural parish west of San Antonio is accused in a lawsuit filed Thursday of sexually assaulting a 16-year-old boy at gunpoint and during private catechism sessions two years ago.

The suit, which names outgoing Archbishop José Gomez as a defendant and claims he sought to conceal the matter, comes three days after the Vatican named Gomez as the next archbishop in Los Angeles.

He is transferring to California next month. Gomez said recently through a spokesman that his five-year tenure involved no new sex-abuse allegations.

The suit claims that Father John M. Fiala repeatedly assaulted the youth from January to August 2008 while Fiala was working as administrator at Sacred Heart of Mary in Rocksprings. That’s the county seat of Edwards County, which is about 110 miles west of San Antonio and is part of the Archdiocese of San Antonio.

The alleged victim, who last fall turned 18 and is unnamed in the suit, was a member of the parish along with his family and still lives in Edwards County.

Gomez removed Fiala from ministry in October 2008 and informed his religious order and the three congregations where he used to work, according to a statement issued Thursday.

The statement also said Fiala’s religious order, the Society of Our Lady of the Most Holy Trinity based in Robstown, has removed him from priestly ministry.

The archdiocese said it was acting on a complaint it received in the fall of that year that involved interference with child custody. The archdiocese did not acknowledge receiving a sex-abuse complaint against Fiala.

The archdiocese said Thursday it has cooperated in the investigation, but it did not say whether it had reported any complaints against Fiala to police.

The young man’s attorneys said his mother told the archdiocese multiple times that she suspected Fiala was sexually abusing her son and was told to contact police.

Archdiocesan spokesman Pat Rodgers cited the pending lawsuit for not responding to questions, including the timing and nature of the complaints and their release to the public.

During a news conference Tuesday to announce Gomez’s new assignment, Father Martin Leopold, head administrator for the archdiocese, said only a couple allegations of sex abuse by priests had surfaced during Gomez’s tenure.

He said they involved claims from 20 and 30 years ago and were made public at Gomez’s request and in keeping with the standards of transparency codified by bishops in the aftermath of an explosion of sex abuse allegations earlier this decade.

“In the last five years, we’re blessed to not have had any allegations of new abuse,” Leopold said, reasserting programs and policies to protect from such abuse.

The Fiala case follows the same pattern of cover-up of sex-abuse complaints in the Catholic Church in the U.S. and Europe, said David Clohessy, national president of Survivors Network of those Abused by Priests.

“Bishops are so quick to say that they have made changes,” he said. “And the ones to pay the price are the young victims.”

Fiala is presumed to be living in his home state of Nebraska, but his exact whereabouts are unknown, Edwards County Sheriff Donald Letsinger said.

He said he expects to soon take findings of an investigation of aggravated sexual abuse against Fiala to a grand jury.

He confirmed that his counterparts in Harper and John Green counties had similar investigations under way. He also said there could be multiple victims alleging the same abuse by Fiala.

Letsinger said he was contacted in 2008 by a family member of the teen with an initial claim of interference with child custody, but that it grew into an investigation of sexual abuse.

He also said the archdiocese has “been more than helpful” in cooperating with his requests. Calls to Fred Hernandez, district attorney for an area that includes Edwards County, were not returned Thursday.

The lawsuit describes a relationship between a then-16-year-old and Fiala, starting at a basketball game in 2007. It says Fiala lavished gifts on the boy, including a laptop computer, cell phone, MP3 player, money and later a Chrysler Sebring.

He provided alcohol and manipulated the teen into private catechism classes on church grounds where the alleged sexual abuse took place up to twice a month, the suit says.

It also claims Fiala gave the teen a ride in a church truck to Big Spring for the teen to visit his girlfriend but stopped at a San Angelo Motel 6. There, he raped the teen at gunpoint in a room and said, “If you tell anyone what happened, I will hurt you and your family,” according to the suit.

On other occasions, the priest manipulated the teen into performing oral sex, once by leveraging his gift of a car and another time pulling a revolver on him, according to the suit.

The teen eventually ran away from home and attempted suicide, the suit says. A school counselor learned of the alleged abuse and contacted the Sheriff’s Office.

Fiala is believed to be in his early 50s and was ordained in 1984. He spent his first 10 years in parish ministry in Nebraska before moving to the Diocese of Corpus Christi.

He also had assignments in Kansas, Missouri and then the San Antonio archdiocese, where he also was pastor and director of the World Apostolate of Fatima.

“One of the issues in this case is he had numerous transfers and periods of no assignments at all,” said the teen’s attorney, Tom Rhodes. “That’s a pretty good red flag.”

Where Father Fiala has been

1997-98: Sacred Heart and Our Lady of Victory in Beeville

1999: Sacred Heart in Beeville and Society of Our Lady of the Most Holy Trinity in Kansas City, Mo.

2002: Society of Our Lady of the Most Holy Trinity in Kansas City, Mo., and St. Joseph’s in Shawnee, Kan.

2005-08: Served in parishes in Rocksprings, Camp Wood and Leakey. Also served as director of the World Apostolate of Fatima in San Antonio.

Fall 2008: Archdiocese receives a complaint of interference in the custody of a minor against Fiala. No allegation of sexual misconduct made.