A metre of snow fell in the Pyrenees leaving 6,000 travellers stranded and blocking up to 40 roads 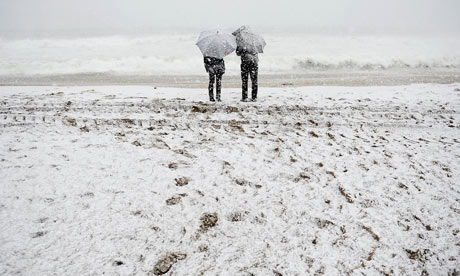 A couple walk on the beach during a snow storm in Barcelona, Spain. (AP)

Nearly a quarter of a million people in north-eastern Spain were without power yesterday after the heaviest snowfall in decades brought major disruption to the region.

A metre of snow fell in the Pyrenees leaving 6,000 travellers stranded and blocking up to 40 roads on the border between Spain and France. Barcelona recorded its heaviest snowfall since 1962 causing road, rail and flight chaos.

Catalonia’s interior minister, Joan Boada, said the power cuts, caused by a fault in a high-tension cable, were affecting the area around Girona, 60 miles north of Barcelona.

Spain’s border with France at La Junquera was closed causing 30-mile traffic jams while 170,000 pupils had the day off as schools were shut, local newspapers reported. About 3,000 people were put up in a town hall overnight and many others stranded in their cars as railway lines and roads became impassable, Boada said.

Tens of thousands more were unable to get home after snow fell at lunchtime and many left their offices to photograph the rare scenes of central Barcelona and its beach lying under a blanket of snow.

“I’ve never seen anything like this here in all my life,” said Barcelona resident Raquel Lasmarias, 35.

The Catalan regional president, José Montilla, toured the affected areas admitting things would not get back to normal as quickly as might be hoped. “Some things cannot be repaired in hours,” he said.

Girona, where 50cm of snow fell, was effectively cut off from the rest of Catalonia with most roads and rail lines blocked and only five of the scheduled 31 departures leaving its airport. The Catalan meteorological office said conditions would slowly improve but warned that unusually cold conditions would continue with widespread frost and ice.

“In Perpignan, passengers were able to bed down on a sleeper train, but we spent the night sitting up and didn’t even get blankets until 3:00 am,” complained Jean-Marc Rossignol, escorting his 75- and a 82-year-old parents to Toulouse.