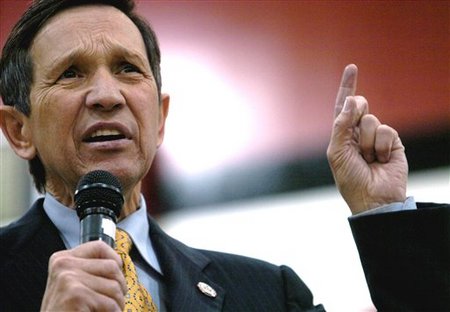 The proposal the White House and Democrats are coalescing around comprises subsidies for lower-income individuals and a mandate that they purchase insurance. It also bans insurers from dropping sick people from their plans or denying coverage on the basis of pre-existing conditions.

An ardent proponent of a single-payer or Medicare-for-all system, Kucinich reiterated his view that the current template offers private insurers “a version of a bailout” and predicted they’ll continue “socking it to consumers.”

“I told the president twice in two different meetings that I couldn’t support the bill if it didn’t have a robust public option and at least if it didn’t have something that was going to protect consumers from these rampant premium increases,” he added.

The Congressional Budget Office projected that the Senate bill, upon which the current version is closely based, will by 2019 extend coverage to roughly 31 million legal American residents while reducing the deficit by $132 billion.

Democrats and progressives consider Kucinich one of the more likely Congressmen to flip his “no” vote, as he favors a progressive health care overhaul and agrees with the broad principles behind the reform effort.

He voted against the narrowly-approved House legislation in November, which contained a public option but one that was weaker than progressives advocated for. The likely elimination of the provision altogether seems to make Kucinich’s vote all the more elusive.

The Ohio congressman left no doubt that he plans to oppose the bill again, even if he were to cast the swing-vote. “If that sounded like a no, you’re correct,” he told guest host Lawrence O’Donnell, declaring the effort was like “building on sand.”

Many Democrats and progressives insist that failing to pass health care reform would be politically disastrous for the party in the November midterm elections.

The congressman told Raw Story in January that Democrats “lost the initiative the minute that our party jumped into bed with the insurance companies.” He alleged that the proposals on the table would further escalate income inequality in the United States.

This video is from MSNBC’s Countdown, broadcast March 8, 2010.