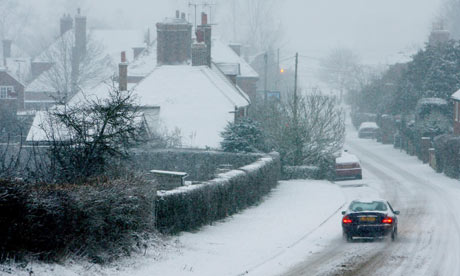 A driver eases through Great Chart in Ashford, Kent, during what the Met Office has now confirmed as the coldest UK winter for 30 years. Photograph: Gareth Fuller/PA

After suffering snow, sleet, rain and consistently freezing temperatures, the knowledge that the Met Office has officially recognised winter 2009-10 as the coldest in 31 years brings with it a certain grim satisfaction.

Provisional figures from the forecaster show the UK winter ‑ which in forecasting terms lasts from the start of December until the end of February ‑ has been the harshest, in temperature terms, since 1978-79.

The news may come as little surprise to those affected by snow in December and January, when falls of up to 2ft saw councils’ grit supplies run low, travel chaos and the return of the Guardian’s snow day live blog.

The data shows that Scotland suffered the most this winter, with the provisional mean temperature 0.24C ‑ only slightly higher than 1978-79, when the figure was 0.16C.

England, Northern Ireland and Wales were warmer, although temperatures of 2.12C, 2.05C and 2.09C respectively could only be considered mild by comparison with the Scottish figure.

“Since mid-December cold weather has often dominated much of the country, with spells of snow and very low temperatures,” said a Met Office spokeswoman. “From southern England to northern Scotland, heavy snow caused travel disruption at times through the season.”

Heavy snow was still causing disruption last week, when Glencoe ski centre received one of the heaviest snowfalls recorded anywhere in the world.

In addition to the snow, the winter culminated with severe flooding in parts of the UK, with one woman killed when her car was swept along a stream.

The lowest temperature recorded this winter was in Altnaharra, around 50 miles south-west of John O’ Groats in the Highland region of Scotland. The -22.3C recorded there was the coldest UK minimum since 1995.

But confirmation of the coldest winter in a generation aside, the Met Office data shows there is some reason to be thankful.

The coldest winter since temperature records began in 1914 was in 1962-63, when the mean temperature for December, January and February was -0.18C.