The US is totally broke: America’s Impending Master Class Dictatorship!

‘Washington is shifting the burden of bad choices today onto the backs of our children and grandchildren,” Obama said in a 2006 floor speech that preceded a Senate vote to extend the debt limit. “America has a debt problem and a failure of leadership.
– Barack Obama 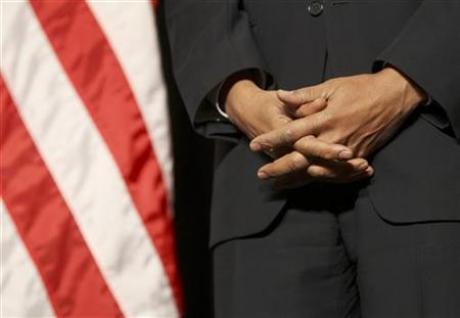 WASHINGTON (Reuters) – The White House will predict a record budget deficit in the current fiscal year and more big shortfalls for the next decade in its upcoming budget proposal, a congressional source told Reuters on Sunday.

In its budget proposal to be released on Monday, the White House predicts a record $1.6 trillion budget deficit for the fiscal year that ends September 30, the Capitol Hill source said.

According to the estimate, deficits will narrow to $700 billion by fiscal 2013 before gradually rising back to $1.0 trillion by the end of the decade, the source said.

President Barack Obama will seek to strike a balance between reducing the deficit over the long term and stimulating the economy in the short term to ease the pain of double-digit unemployment.

Criticized by Republicans as a big spender, Obama used his State of the Union address last week to tell Americans he would dig the country out of a “massive fiscal hole.”

That hole is even deeper than previously believed, according to the estimate by the White House’s Office of Management and Budget.

The estimate for the current fiscal year is significantly higher than the $1.35 trillion figure forecast by the nonpartisan Congressional Budget Office last week.

Despite the difference, both estimates indicate that the deficit will continue to hover at a level not seen since World War Two, when measured as a percentage of the economy. Last year the government posted a $1.4 trillion deficit.

In his budget, Obama will propose a three-year freeze on some domestic programs to save $20 billion next year and $250 billion over the coming decade.

But that will not be enough to get deficits down permanently to the 3 percent of gross domestic product that most economists consider sustainable.

Deficits are projected to fall as the economy recovers, but they will still average roughly 4.5 percent of GDP over the coming decade, according to the estimate.

Deficits are expected to rise again toward the end of the decade due to the increasing cost of retirement and healthcare programs as the “baby boom” generation retires.

China, the biggest foreign holder of U.S. Treasuries, has urged the United States to get its fiscal house in order.

The grim forecast could help build support for a bipartisan commission proposed by the White House that would recommend ways to address long-term budget problems.

Obama and his fellow Democrats face a growing voter backlash for the aggressive spending measures they have taken to stimulate the economy.

But Democrats point out that most of the fiscal mess has been inherited from the previous administration of Republican George W. Bush, who cut taxes and created an expensive prescription drug-benefit while pursuing wars in Iraq and Afghanistan.

The recession, which began in December 2007 and ended last year, also worsened the fiscal picture by depressing government revenues while forcing up spending on unemployment benefits and other safety-net programs.