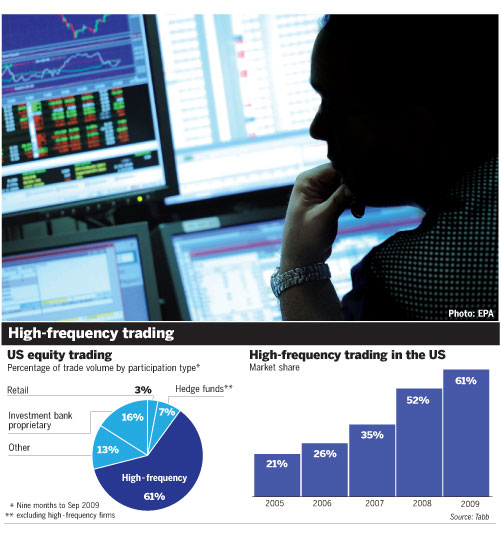 (Financial Times) — An explosion in trading propelled by computers is raising fears that trading platforms could be knocked out by rogue trades triggered by systems running out of control.

Trading in equities and derivatives is being driven increasingly by mathematical algorithms used in computer programs. They allow trading to take place automatically in response to market data and news, deciding when and how much to trade similar to the autopilot function in aircraft.

Analysts estimate that up to 60 per cent of trading in equity markets is driven in this way.

Concerns have been highlighted by news that NYSE Euronext, the transatlantic exchange operator, has fined Credit Suisse proprietary trading arm for the first time for failing to control its trading algorithms. In the Credit Suisse case, its system bombarded the NYSE’s systems with hundreds of thousands of “erroneous messages” in 2007, slowing down trading in 975 shares.

The case was far from isolated, say traders. CME Group, the Chicago-based futures exchange, is investigating a case this month where a trader in “mini” S&P Index futures contracts “inadvertently traded approximately 200,000 contracts as both buyer and seller”.

Last year, the London Stock Exchange suffered a three-hour outage after its trading system collapsed under the strain of a huge volume of orders. Some traders blamed the spike in volumes from algorithmic trading.

Frederic Ponzo, managing partner at GreySpark Partners, a consultancy, said: “It is absolutely possible to bring an exchange to breaking point by having an ‘algo’ entering into a loop so that by sending them at such a rate the exchange can’t cope.”

Regulators say it is unclear who is monitoring traders to ensure they do not take undue risks with their algorithms.

The Securities and Exchange Commission has proposed new rules that would require brokers to establish procedures to prevent erroneous orders.

Mark van Vugt, global head of sales at RTS Realtime Systems, a trading technology company, said: “If a position is blowing up so fast without the exchange or clearing firm able to react or reverse positions, the firm itself could be in danger as well.”

– Paul Wilmott on CNBC: The Link Between Prices And Value Has Been Completely Lost Because Of High Frequency Trading