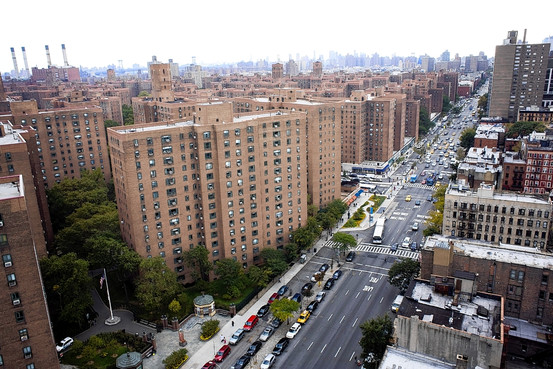 A group led by Tishman Speyer Properties has decided to give up the sprawling Peter Cooper Village and Stuyvesant Town apartment complex in Manhattan to its creditors in the collapse of one of the most high-profile deals of the real-estate boom.

The decision comes after the venture between Tishman and BlackRock Inc. defaulted on the $4.4 billion debt used to help finance the deal. The venture acquired the 56-building, 11,000-unit property for $5.4 billion in 2006—the most ever paid for a single residential property in the U.S. The venture had been struggling for months to restructure the debt but capitulated facing a massive debt load and a weak New York City economy that has undercut rents and demand for high-priced apartments.

Tishman Speyer’s deal for Stuyvesant Town and Peter Cooper Village, which was the biggest real estate deal at the time, may end up in bankruptcy, the News Hub panel reports.

The property’s owners signaled they would be unable to reach a deal with lenders and instead decided to allow creditors to proceed with what amounts to an orderly deed-in-lieu of foreclosure, which means a borrower voluntarily gives the property back to lenders to avoid a foreclosure proceeding.

“It has become clear to us through this process that the only viable alternative to bankruptcy would be to transfer control and operation of the property, in an orderly manner, to the lenders and their representatives,” the venture said in a statement to The Wall Street Journal. “We make this decision as we feel a battle over the property or a contested bankruptcy proceeding is not in the long-term interest of the property, its residents, our partnership or the city.”

The troubles at Stuyvesant Town reflect the dismal condition of the apartment market throughout the country as high unemployment hammers rents and occupancy levels. Hardest-hit are highly leveraged deals done by private companies that, unlike large public real-estate companies, have been closed out of the capital markets.

Stuyvesant Town creditors weren’t immediately available for comment. But pressure on the Tishman group has mounted in recent weeks as some of the property’s creditors have threatened to foreclose. In a letter sent to Tishman last week, a group including Concord Capital, an affiliate of Winthrop Realty Trust, said it intends to pursue “its rights and remedies,” including possibly moving to foreclose on the property within 90 to 180 days.

By some accounts, Stuyvesant Town is only valued at $1.8 billion now, less than half the purchase price. By that measure, all the equity investors—including the California Public Employees’ Retirement System, a Florida pension fund and the Church of England—and many of the debtholders, including Government of Singapore Investment Corp., or GIC, and Hartford Financial Services Group, are in danger of seeing most, if not all, of their investments wiped out.

The Tishman venture’s decision to hand back the keys represents a defeat for a company that for years represented the gold standard of commercial real-estate deals, reaping high returns for investors.
Journal Community

Tishman Speyer has invested in such trophy assets as Rockefeller Center and the Chrysler Building, and its founder, Jerry Speyer, has been a major player in both real-estate and political circles for years. His son Rob Speyer is being groomed to take over the family real-estate empire.

The Stuyvesant Town deal is one of several Tishman Speyer did at the top of the market that the company is trying to save. But the company itself isn’t threatened. It took advantage of easy credit and investors’ eagerness to buy into real estate during the good times. As a result, it didn’t put much of its own cash into deals.

Of the $5.4 billion price tag on the Stuyvesant property, Tishman invested only $112 million of its own money, with about $56 million from Jerry Speyer and Rob Speyer, co-chief executives of the New York-based company.

Tishman has earned more than $10 million in property-management fees since the Stuyvesant Town acquisition, according to analysts at Deutsche Bank AG. Tishman decided to waive certain fees last year and managed the property for a loss, according to a person familiar with the matter.

Tishman Speyer “would not consider a long-term management contract to continue operating the property that does not involve ownership,” the partnership said in the statement. “Without a restructuring that would keep our ownership group as part of the equity, we felt it best that the new owners install a new management team.”

The Tishman venture’s acquisition of Stuyvesant Town was controversial in New York. The Stuyvesant Town complex was developed by MetLife for returning World War II veterans and remained a middle-class haven even as rents in other parts of the city soared. Tishman’s plans were to raise the rents for hundreds of the units to market rates.

But the strategy backfired because of a slowing New York economy, a heavy debt load and a court ruling hindering the owners’ ability to convert rent-controlled units to market rentals. In January, the property depleted what was left in reserve funds and defaulted on its first mortgage.

Nationwide, scores of other apartment deals also are tanking as landlords are being forced to cut rents and offer incentives like flat-screen TVs to attract and retain tenants. San Francisco’s Lembi family, the biggest apartment owner in that city, has been forced to give up numerous apartment properties to its lenders because it couldn’t repay debt.

Investors who purchased commercial-mortgage-backed securities, or CMBS, also are facing losses. In December, more multifamily CMBS loans moved into delinquency than for any other property type, with 113 new loans, totaling $1.1 billion, becoming delinquent, according to Moody’s Investors Service.

The Stuyvesant Town collapse comes amid mounting woes in the market for retail stores, hotels, apartments and other commercial property. Mall-giant General Growth Properties and hotel-chain Extended Stay Inc. filed for bankruptcy-court protection last year, and more commercial-property projects could fail amid an inability to repay debt because of dwindling rent rolls and still-scarce financing for all but large real-estate investment trusts.

The troubles experienced by landlords nationwide are stoking fears among regulators and bankers that turmoil in commercial real-estate may derail the hoped-for economic recovery.

Research firm Foresight Analytics estimates delinquencies on commercial real-estate loans held by banks will rise to 9.47% in the fourth quarter, up from 5.49% a year earlier.

Meanwhile, the delinquency rate on CMBS stood at 4.9% in December, according to Moody’s, up five-fold in just a year.

Write to Lingling Wei at lingling.wei@dowjones.com and Mike Spector at mike.spector@wsj.com