CNBC interview with David Drummond, chief legal officer at Google, who discusses the Internet giant’s reaction to an assault by hackers who sought to penetrate the e-mail accounts of Chinese human rights activists. 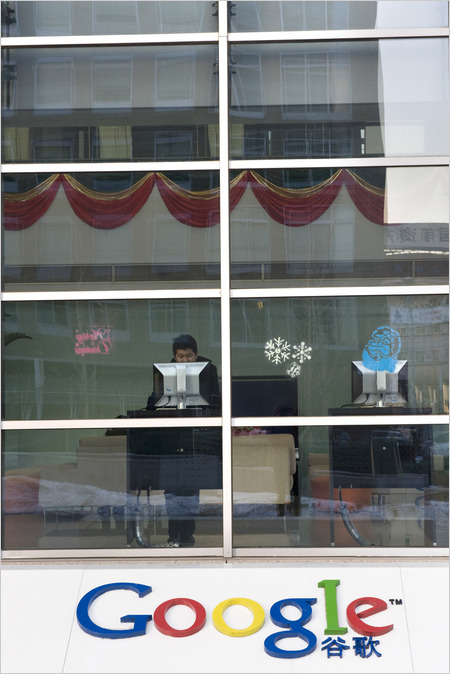 A worker in the lobby of Google’s office Wednesday in Beijing.

BEIJING – Two days after Google announced that it would quit China unless the nation’s censors eased their grip, the Chinese government offered an indirect but unambiguous response: Companies that do business in China must follow the laws of the land.

The comments, by two different officials Thursday, suggested that China was unlikely to give ground on Google’s demands that its search engine results be unfiltered. In announcing its decision Tuesday that it might leave the world’s biggest Internet market, Google also cited a series of cyberattacks aimed at breaching the accounts of human rights advocates on its e-mail service, Gmail.

Several of those who said their e-mail accounts were hacked provided more details about the assaults Thursday.

After a day of silence, the Foreign Ministry said that China welcomed foreign Internet companies but that those offering online services must do so “in accordance with the law.” Speaking at a scheduled news conference, Jiang Yu, a ministry spokeswoman, did not address Google’s complaints about censorship and cyberattacks and simply stated that “China’s Internet is open.”

The remarks, and those of another high-ranking official who called for even tighter Internet restrictions, may speed Google’s departure and increase friction between Beijing and the Obama administration, which has made priorities of Internet freedom and online security.

“The recent cyberintrusion that Google attributes to China is troubling, and the federal government is looking into it,” Nicholas Shapiro, a White House spokesman, said Wednesday. Beyond voicing concern, United States officials had yet to say how they might respond.

If the Foreign Ministry’s comments were vague, those of Wang Chen, the information director for the State Council, or cabinet, were more pointed.

In the transcript of an interview posted Thursday on the council’s Web site, Mr. Wang urged Internet companies to increase scrutiny of news or information that might threaten national stability and stressed the importance of “guiding” online public opinion.

Web sites in China are required to employ people who monitor and delete objectionable content; tens of thousands of others are paid to “guide” bulletin board Web exchanges in the government’s favor.

Despite what appeared to be an unsympathetic stance toward Google, some analysts and writers saw an opening for compromise. Zhao Jing, a journalist and blogger popularly known as Michael Anti, described the government’s initial response as having struck a balance between moderation and not wanting to appear too quiescent to its domestic audience.

He said Google’s stature and the United States’ increasingly vocal stance on Internet freedom could not easily be ignored. Google’s pulling out, he said, would “set a bad example for the business climate in China and make a joke of the government claims of a free Internet.”

Such optimism was hard to find in the state-run Chinese media. Those that even covered the attack in much detail portrayed Google’s move as a cynical attempt either to embarrass Beijing or to escape its business failings in China. Even the English-language China Daily, which provides foreign readers a reliably liberal selection of news, ran on its front page the headline “Google Pullout Threat ‘a Pressure Tactic.’ ”

Guo Liang, the director of the China Internet Project at the Chinese Academy of Social Sciences, said he thought Google’s accusations were little more than public whining. “Google may use politics as its excuse, which is easy for Westerners to accept, but in essence this is just a business failure,” he said. “If I were the government, I wouldn’t even bother to respond.”

Both inside China and overseas, the number of people stepping forward to report accounts of hacking, both suspected and successful, continued to rise. Zeng Jinyan, the wife of the imprisoned rights defender Hu Jia, said on her blog that shadow copies of recent e-mails she had sent had automatically been sent to an address she did not recognize.

Teng Biao, a civil rights lawyer, discovered the same thing. In an interview, he said copies had been sent to a Gmail address just two characters different from his own.

Tenzin Seldon, a Tibetan activist and a student at Stanford University in California, said Google had examined her laptop and confirmed that hackers had gained access to her Gmail account.

And in Washington, Nury A. Turkel, a lawyer who advocates for China’s Uighur minority, said he was certain someone had hacked into his Gmail account because text he had used in a message ended up in the body of an e-mail message that he said was harboring a virus.

Among those who say they were victimized was Gregory Fayer, a lawyer who represents a California software maker suing the Chinese government over claims of piracy. He said more than a dozen employees at the firm had received e-mail messages Monday purporting to come from their managing partner.

Investigators, he said, later determined the messages were so-called Trojan horse attacks intended to breach computers and allow the infiltrators to remotely remove files. “We have no idea who is sending these, but they’re very sophisticated,” said Mr. Fayer, whose client, Cybersitter, filed a $2.2 billion suit last week. “People feel violated.”

Robert Gibbs, the White House press secretary, said Wednesday that the administration had been briefed by Google on the company’s decision. However, he declined to describe what actions the government might take in response to the claims of Chinese-directed Internet attacks.

Mr. Shapiro, the White House spokesman, said that President Obama had stated on a recent China trip that Internet freedom was a central human rights issue. He also said that the president had made Internet security a national priority.

The attacks present a challenge for the Obama administration, which debated the role of a federal Internet security adviser last year. The administration is grappling with how to balance stricter security controls with the freedom of technology companies to innovate.

Several Internet security specialists pointed out that a group within the White House led by Lawrence H. Summers, the national economic adviser, had mentioned Google in discussions on the appointment as an example of an innovative Silicon Valley company that might be hamstrung by strict new Internet security restrictions.

“It’s ironic that the new economy folks at the White House were pushing back against faster movement on cybersecurity to protect companies like Google from stricter regulations,” said James Lewis, an Internet security specialist at the Center for Strategic and International Studies in Washington. Last year, Mr. Lewis led a bipartisan study calling for the creation of a strong Internet czar reporting directly to the president to combat a rash of new security threats.

The White House said on Tuesday that Howard A. Schmidt, a compromise candidate who was chosen last month to be the Internet security adviser, would not start until later in the month.