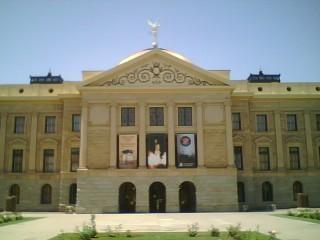 PHOENIX — Arizona state legislators go back to work Monday in an attempt to battle a nearly $1.5 billion dollar deficit.

Martin said unless the capitol buildings are sold before the end of the month, there will be no more money meaning, “If they continue to issue checks without having money from the sale of the buildings, I have to bounce them.”

That’s because Martin said spending has increased double digits during the first two years of the recession, while revenues were dropping at the same rate.

Martin said the biggest issue is what he calls welfare healthcare.

“Ten years ago AHCCCS was only a $200 million dollar agency, today it’s over $2 billion,” he said.

“Well than means 40 to 45 kids in a classroom,” said Michael O’Neil, of O’Neil Associates, who does public opinion research, “There’s a whole lot more people that live here now than lived here in ’04.”

O’Neil said Arizona’s situation is very similar to California because revenues are far short of expenditures.

The reason he doesn’t see a solution in sight is because of the governor’s history with her own party and the Democrats.

“I see a recipe for stalemate,” said O’Neil.

That’s why O’Neil agrees with Martin who said this should be given to the people to decide, including options about how to balance the budget and how much government they want to pay for.

But O’Neil said a vote may not be likely before summer.