December was the worst month for US unemployment since the Great Recession began. 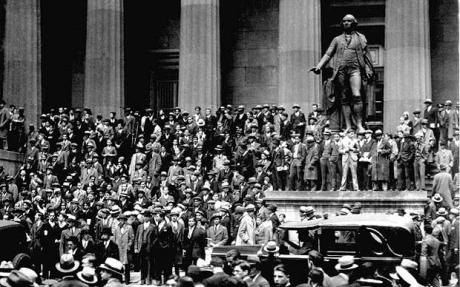 History repeating itself? President Obama has been accused by some economists of making the same mistakes policymakers in the US made in the Great Depression, which followed the Wall Street crash of 1929, pictured Photo: AP

The labour force contracted by 661,000. This did not show up in the headline jobless rate because so many Americans dropped out of the system. The broad U6 category of unemployment rose to 17.3pc. That is the one that matters.

The home foreclosure guillotine usually drops a year or so after people lose their job, and exhaust their savings. The local sheriff will escort them out of the door, often with some sympathy — just like the police in 1932, mostly Irish Catholics who tithed 1pc of their pay for soup kitchens.

Realtytrac says defaults and repossessions have been running at over 300,000 a month since February. One million American families lost their homes in the fourth quarter. Moody’s Economy.com expects another 2.4m homes to go this year. Taken together, this looks awfully like Steinbeck’s Grapes of Wrath.

Judges are finding ways to block evictions. One magistrate in Minnesota halted a case calling the creditor “harsh, repugnant, shocking and repulsive”. We are not far from a de facto moratorium in some areas.

This is how it ended between 1932 and 1934, when half the US states declared moratoria or “Farm Holidays”. Such flexibility innoculated America’s democracy against the appeal of Red Unions and Coughlin Fascists. The home siezures are occurring despite frantic efforts by the Obama administration to delay the process.

This policy is entirely justified given the scale of the social crisis. But it also masks the continued rot in the housing market, allows lenders to hide losses, and stores up an ever larger overhang of unsold properties. It takes heroic naivety to think the US housing market has turned the corner (apologies to Goldman Sachs, as always). The fuse has yet to detonate on the next mortgage bomb, $134bn (£83bn) of “option ARM” contracts due to reset violently upwards this year and next.

US house prices have eked out five months of gains on the Case-Shiller index, but momentum stalled in October in half the cities even before the latest surge of 40 basis points in mortgage rates. Karl Case (of the index) says prices may sink another 15pc. “If the 2008 and 2009 loans go bad, then we’re back where we were before – in a nightmare.”

David Rosenberg from Gluskin Sheff said it is remarkable how little traction has been achieved by zero rates and the greatest fiscal blitz of all time. The US economy grew at a 2.2pc rate in the third quarter (entirely due to Obama stimulus). This compares to an average of 7.3pc in the first quarter of every recovery since the Second World War.

Fed hawks are playing with fire by talking up about exit strategies, not for the first time. This is what they did in June 2008. We know what happened three months later. For the record, manufacturing capacity use at 67.2pc, and “auto-buying intentions” are the lowest ever.

The Fed’s own Monetary Multiplier crashed to an all-time low of 0.809 in mid-December. Commercial paper has shrunk by $280bn ($175bn) in since October. Bank credit has been racing down a hair-raising black run since June. It has dropped from $10.844 trillion to $9.013 trillion since November 25. The MZM money supply is contracting at a 3pc annual rate. Broad M3 money is contracting at over 5pc.

Professor Tim Congdon from International Monetary Research said the Fed is baking deflation into the pie later this year, and perhaps a double-dip recession. Europe is even worse.

This has not stopped an army of commentators is trying to bounce the Fed into early rate rises. They accuse Ben Bernanke of repeating the error of 2004 when the Fed waited too long. Sometimes you just want to scream. In 2004 there was no housing collapse, unemployment was 5.5pc, banks were in rude good health, and the Fed Multiplier was 1.73.

How anybody can see imminent inflation in the dying embers of core PCE, just 0.1pc in November, is beyond me.

Mr Rosenberg is asked by clients why Wall Street does not seem to agree with his grim analysis.

His answer is that this is the same Mr Market that bought stocks in October 1987 when they were 25pc overvalued on Shiller “10-year normalized earnings basis” – exactly as they are today – and bought them at even more overvalued prices in 2007, long after the property crash had begun, Bear Stearns funds had imploded, and credit had its August heart attack. The stock market has become a lagging indicator. Tear up the textbooks.