Two American girls, believed to be aged 12 and 14, are being hunted by police over a bank robbery. 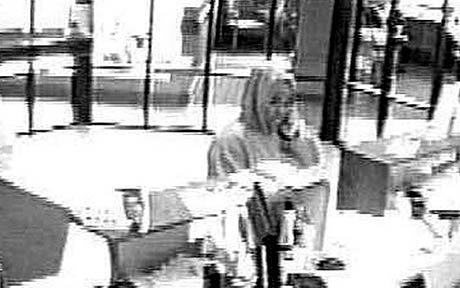 Two young girls rob bank…Police are hunting two young girls – one believed to be just 12 year-old – who robbed a bank in the middle of the afternoon. The two girls, who were wearing matching blue sweatshirts, calmly walked into the First National Bank i Photo: SPLASH

The young girls walked into a branch of 1st National Bank in Cincinnati, Ohio and handed a note to the cashier demanding money.

According to police the note implied the girls would harm employees if the money was not given to them. They did not appear to have any weapons.

Staff complied and the girls walked out with a bag full of money. They then evaded an extensive police search which included a helicopter and sniffer dogs.

One of the girls was described as heavy set, around 5 feet 4 inches tall, and was wearing a hooded top and blue jeans.

The other was said to be second thin, around 5 feet tall and wearing a baseball cap.

Local police released a grainy black-and-white surveillance photograph of one of the alleged bank robbers.

The robbery took place at 3.20pm on Tuesday and the girls were seen leaving on foot and heading for a nearby housing estate.