Here is one of many reasons what that non-existent terrorist threat was all about:

Taking away more of your freedom and destroy your health:

– Full-Body Scanners to Be Put in British Airports (ABC News)

Those full-body scanners will soon be installed everywhere! 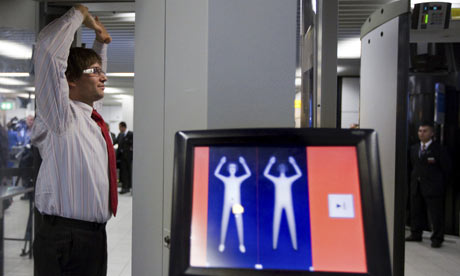 “This is a new type of threat,” Brown told the BBC’s Andrew Marr Show today. “We recognize there are new weapons being used by al-Qaeda and we need to respond.”

The prime minister said the machines are part of a response to “a new form of explosive that was not being detected by ordinary machines.” The body scanners will be introduced gradually and other new technology will employed that can detect explosives directly, he said.

Extra body searches, extended restriction on leaving seats, and a greater use of explosive-sniffing dogs are additional measures being considered, Transport Secretary Andrew Adonis said in a separate interview with the Sunday Times.

Governments around the world are reviewing airport security after an attempt to blow up a passenger airliner over Detroit on Christmas Day. In the U.S., President Barack Obama ordered a review of terrorist intelligence gathering and aviation security after the accused attacker, Umar Farouk Abdulmutallab, a 23- year-old Nigerian, allegedly smuggled explosives onboard the airliner even after being on a U.S. government list of people with suspected ties to terrorism.

Brown refused to comment on whether British airport security should make greater use of profiling, preferring instead to talk about the country’s “watch list” of suspects.

“We’ve got a watch list, we’re identifying people as they come in,” he said. “Where there’s a watch list there are particular people who’re being targeted.”

To contact the reporter on this story: Robert Hutton in London at rhutton1@bloomberg.net