Justice you can believe in! 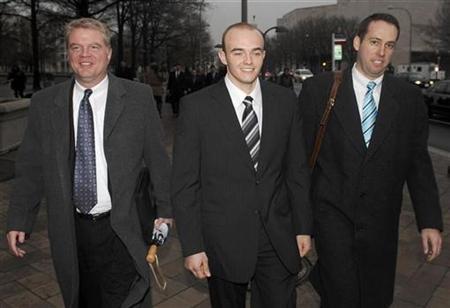 Blackwater Worldwide security guard Nick Slatten (C) leaves the federal courthouse after being arraigned with 4 fellow Blackwater guards on manslaughter charges for allegedly killing 14 unarmed civilians and wounding 20 others in a 2007 shooting in Baghdad.

BAGHDAD (Reuters) – Iraq expressed its disappointment on Friday with a U.S. federal court ruling that threw out all charges against five Blackwater Worldwide security guards accused of gunning down Iraqi civilians in 2007.

Government spokesman Ali al-Dabbagh said the five men had committed a “serious crime” in the September 2007 shooting in Baghdad, which strained U.S.-Iraqi relations and became a symbol for many Iraqis of foreign disregard for local life.

“The Iraqi government regrets and is disappointed by the U.S. court’s decision … We have our own investigations and they showed that Blackwater committed a serious crime in the killing of 17 Iraqi citizens,” Dabbagh said.

“The Iraqi government is considering other legal means through which it can sue the Blackwater company,” he added.

After the 2003 invasion, private guards protecting U.S. personnel enjoyed immunity from prosecution in Iraqi courts, but that ended with a bilateral pact that took effect in 2009.

The five guards were charged in a U.S. federal court a year ago with 14 counts of manslaughter, 20 counts of attempt to commit manslaughter and one weapons violation count.

On Thursday, a U.S. district judge threw out the case, saying prosecutors had wrongly used statements the guards made to State Department investigators under a threat of job loss in violation of defendants’ constitutional rights.

“Of course we’re upset when we believe that people might have caused a crime and they are not held accountable,” he told reporters in Baghdad, adding the dismissal might create a backlash against other security firms operating in Iraq.

The guards, U.S. military veterans, said they heard a nearby explosion and gunfire, and began shooting across a crowded intersection in self-defence.

One Iraqi at the scene, whose young son was killed in the incident, said the guards indiscriminately rained gunfire on cars at the intersection near the convoy.

Mohammed Usama, the son of a man killed in the incident, said he was surprised at the U.S. judge’s verdict.

“I did not expect the court to acquit these killers, but what can we do? We cannot do anything with the U.S. government and their law.”

A sixth Blackwater guard had earlier pleaded guilty to charges of voluntary manslaughter and attempt to commit manslaughter, and agreed to cooperate with prosecutors.