Don’t you love the Bush doctrine of preemptive war?

Preemptive action to root out al-Qaeda? Sure!: 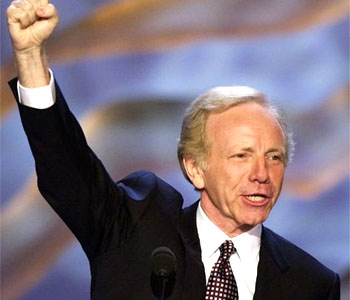 Sen. Joe Lieberman (I-Conn.) Sunday said that Yemen could be the ground of America’s next overseas war if Washington does not take preemptive action to root out al-Qaeda interests there.

Lieberman, who helms the Senate Homeland Security and Governmental Affairs Committee, said on “Fox News Sunday” that the U.S. will have to take an active approach in Yemen after multiple recent terrorist attacks on the U.S. were linked back to the Middle Eastern nation.

The Connecticut senator said that an administration official told him that “Iraq was yesterday’s war, Afghanistan is today’s war. If we don’t act preemptively, Yemen will be tomorrow’s war.”

Lieberman, who is known to be hawkish on security issues, said that Yemen needs to be a focal point because two recent attacks were linked back to a growing al-Qaeda presence there.

Maj. Nidal Malik Hasan — the Army officer who killed 13 people in a shooting rampage at Fort Hood in November — was linked to Anwar al-Awlaki, a radical Muslim cleric now based in Yemen.

The senator said that Umar Farouk Abdulmutallab, the 23-year-old Nigerian accused of attempting to set off a plastic-explosive device aboard a Northwest Airlines flight from Amsterdam to Detroit on Friday, “reached out to Yemen” but was “not sure” if he contacted al-Awlaki. Abdulmutallab reportedly told authorities he traveled to Yemen and met al-Qaida figures there.

The U.S. earlier this month launched cruise missiles at two al-Qaeda targets in Yemen. The attacks represented a major escalation of U.S. efforts against al-Qaeda in Yemen.

Sen. Arlen Specter (D-Pa.), also on Fox, agreed that preemptive strikes should be “one [option] we ought to be considering” but added that “it’s a big, complex subject.”

Concerns about Yemen as a breeding ground for extremists have quickly grown since Christmas Day, when Abdulmutallab attempted his attack but was foiled by passengers and crew.

Lieberman praised the Obama administration for reaching out to the government in Yemen about extremism there. But he said that the administration should not release the 90 Yemenis now being held at the military prison at Guantanamo Bay, Cuba.

The White House is attempting to close down the base by releasing some detainees and eventually transferring others to a facility in Illinois.

Lieberman also keyed in on internal improvements on security watch lists, saying the government should cast its net wider in order to stop potential terrorists from boarding planes.

“We have to be able to, in our age, put 500,000 names on a computer and have everyone that’s trying to come to the U.S. go through that list,” he said. “That doesn’t mean they’re convicted of any wrongdoing, but it would be basis enough to take this guy out of the line in Amsterdam and do a full body check.”