Mother nature is definitely on the side of truth:

(More information at the end of the following article.) 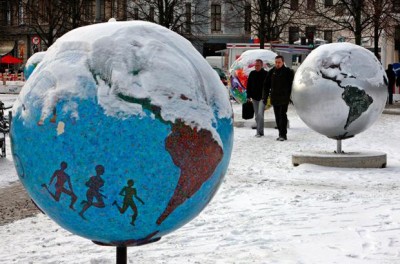 How marvellous a punchline for this farce of a summit, as snow settles on the globes erected to publicise our warming world:

...a Washington snowstorm is forcing Speaker Nancy Pelosi, D-California, to make an early departure from a global warming summit here in Denmark.

In fact, there’s an endless supply of regional varieties of the same joke. Here’s one about Barack Obama at the same global warming summit:

The president had arrived in the Danish capital hours earlier, amid stiff winds and driving snow, and headed toward the convention center, where delegates had worked through the night trying to draft a climate document the world could agree to.

Or there’s the Scottish version:

Copenhagen isn’t only place having climate problems… Scotland was in the grip of a big freeze last night that disrupted travel plans and threatened the weekend’s sports fixtures… But heavy snow showers forecast for the weekend have raised hopes of a bumper start to the week for Scotland’s ski centres.

Or you can tell the Alaskan one:

All the experts says the effects of climate change will be felt most in Alaska, home of the ex-governor who contends climate change is no big deal. Good thing she wasn’t in Valdez this week when the citizenry got buried under a record snowfall…

We’re not talking about your ordinary little dump here. That was in Copenhagen, where world leaders were meeting to discuss what to do about global warming and the Bloomberg news service was warning that Barack Obama and the rest would “face freezing weather as a blizzard dumped 10 centimeters (4 inches) of snow on the Danish capital overnight.”