I don’t care about Democrats or Republicans, because they are just two wings of the same bird.

And again: Those elite puppets know that they are bankrupting/destroying America:

(Who the f&%# cares to which party those criminals belong to? Judge them by their fruit, by their continuing lies. Obama lies all of the time. Obama has tripled Bush’s budget deficit. What does that say about his leadership?)

The Fed and the US government are bankrupting America, destroying the US dollar and the economy, turning the US into a Third World country.

Here is one of the very few voices of sanity, freedom, truth and sound economics:

I am still posting this stuff to warn people about what is about to happen, although I am totally bored by it. I know what is coming and you do not have to be a prophet to know this.

I know the message will never reach Obama, Bush, Clinton, McCain or Palin worshipers, but maybe there are still some thinking people out there, that have not come across this message and it will wake them up and they hopefully prepare themselves for the Greatest Depression and survive. For these people I am doing Infinite Unknown.

The rest who have failed to prepare, have prepared to fail. And as the No.1 trend forecaster in the world Gerald Celente has said: Those people that have been warned by us and still do nothing about it deserve to go under. 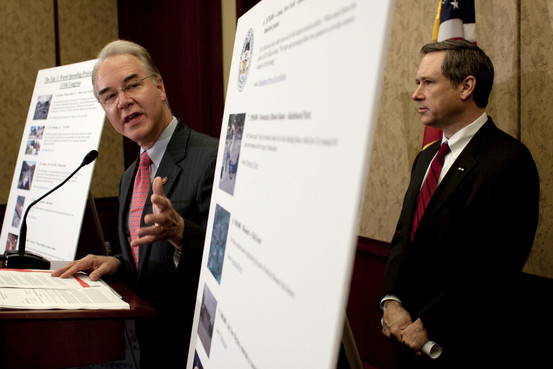 Congressional Democrats prepared to pass big spending bills and a roughly $1.8 trillion increase in the federal debt limit, all at a time when concern is growing over the government’s chronic deficits.

Republicans immediately attacked the moves as an irresponsible spending spree — even as new analyses showed some GOP lawmakers had inserted into the spending bills controversial favors earmarked for their constituents.

A series of big spending bills sitting in Congress that could increase the federal debt ceiling currently at $1.8 trillion is causing a big stir among fiscal conservatives and liberals. WSJ’s John McKinnon reports.

The end-of-year wrangling over spending and borrowing is dramatizing the gap that may be widening between the Democratic congressional agenda — built around extending health-care coverage to tens of millions of Americans — and voters’ growing concern about the size of government and deficit spending.

“There is no question they are hopelessly out of step,” said Sen. Bob Corker (R., Tenn.). “The wrath of the American people is palpable. They are way, way off base.”

The House Thursday passed a $1.1 trillion spending bill, largely along party lines, covering the budgets of 10 cabinet agencies, from transportation to education, for the fiscal year ending Sept. 30, 2010. Just over half that money flows through benefit programs that aren’t affected by annual appropriations votes.

The measure represents annual appropriations increases averaging almost 10% for the agencies covered, a figure well above the rate of inflation. Republicans flagged that as further evidence of out-of-control spending, noting that the Treasury on Thursday reported a $120.3 billion deficit for November. Democrats said the appropriations bill was inflated by some special factors, such as a huge increase for the Commerce Department to employ tens of thousands of people for the once-a-decade census.

And Democrats were quick to point out that Republicans got their share of the earmarks — specially designated spending — that helped inflate the cost of Thursday’s spending bills.

For example, Sen. Richard Shelby (R., Ala.), the ranking Republican on an appropriations subcommittee, got 30 earmarks worth $61.6 million in the areas covered by his panel, according to an analysis by Taxpayers for Common Sense. Mr. Shelby’s office declined to comment.

While dealing with spending for the current fiscal year, lawmakers are also crafting a plan to raise the ceiling on the government’s borrowing authority. The legal limit for federal borrowing currently stands at $12.1 trillion, and the administration has said that if that figure wasn’t increased soon, the Treasury wouldn’t be able to cover Washington’s spending obligations. Lawmakers are looking to lift the debt ceiling by nearly 15%, enough to get the government through the 2010 election.

While Democrats generally agree on the need to raise the ceiling by that amount, they are splitting over whether to try to pair it with action to force more fiscal discipline — the creation of a “deficit reduction commission.”

Sen. Kent Conrad (D., N.D.), the Senate Budget Committee chairman and lead sponsor of a bill creating the deficit commission, said that he and his allies were “pressing hard for the opportunity to get a vote” on deficit reduction.

But House leaders are maneuvering to make the pairing move almost impossible by instead linking the debt ceiling to a must-pass bill on defense spending. Many rank-and-file House lawmakers oppose a commission, worried that it would diminish their authority and take aim at popular programs such as Social Security and Medicare. Speaker Nancy Pelosi (D., Calif.) also has signaled her opposition.

Mr. Conrad said House leaders were risking a defeat on the debt ceiling. “They could send something over here that would simply not get the votes,” he said. “We’re not kidding here.”

Write to John D. McKinnon at john.mckinnon@wsj.com and Greg Hitt at greg.hitt@wsj.com

In a bold but risky year-end strategy, Democrats are preparing to raise the federal debt ceiling by as much as $1.8 trillion before New Year’s rather than have to face the issue again prior to the 2010 elections.

“We’ve incurred this debt. We have to pay our bills,” House Majority Leader Steny Hoyer told POLITICO Wednesday. And the Maryland Democrat confirmed that the anticipated increase could be as high as $1.8 trillion — nearly twice what had been assumed in last spring’s budget resolution for the 2010 fiscal year.

The leadership is betting that it’s better for the party to take its lumps now rather than risk further votes over the coming year. But the enormity of the number could create its own dynamic, much as another debt ceiling fight in 1985 gave rise to the Gramm-Rudman deficit reduction act mandating across-the-board spending cuts nearly 25 years ago.

Already in the Senate, there is growing pressure in both parties for the creation of a novel bipartisan task force empowered to force expedited votes in the next Congress on deficit reduction steps now shunned by lawmakers.

As introduced Wednesday, the legislation sets no specific targets for deficit reduction, but its 18-member task force — 16 of whom would come from Congress — is promised immense leverage to force change if they can first come together behind a plan.

“This is a defining moment,” said Senate Budget Committee Chairman Kent Conrad (D-N.D.), one of the lead sponsors, and New Hampshire Sen. Judd Gregg, the panel’s ranking Republican, is already maneuvering to try to add the legislation as an amendment to any bill tapped to carry the debt increase.

As explained by Hoyer and other Democrats, that will almost certainly be a pending $636.4 billion Pentagon appropriations bill that includes $128.3 in contingency funds for military operations in Iraq and Afghanistan.

The House leadership has held back the bill for weeks, saving it for this moment, but now appropriations clerks have been instructed to have a final package ready to go by Monday.

Leadership staff stressed that nothing was yet final in what has become a year-end negotiation between top Democrats in the House and Senate. But the Senate appears to have been the first to put the $1.8 trillion number on the table. And Hoyer’s comments are the clearest yet on the scale of the increase and the expectation that it will be part of a larger year-end legislative train pulled along by the must-pass military bill.

House Appropriations Committee Chairman Dave Obey, who is pursuing job-related measures he would also like to add, insisted that the debt issue is a “leadership call” alone. But the Wisconsin Democrat showed no sign of opposition to the strategy outlined by Hoyer.

“It is December. We don’t really have a choice,” Obey told POLITICO. “The bill’s already been run up; the credit card has already been used. When you get the bill in the mail you need to pay it.”

Though Treasury can buy itself time by moving assets around, it is already coming close to the current debt ceiling of $12.1 trillion. Last spring, the Democratic-backed budget proposed to raise this to about $13 trillion, but given the current pace of borrowing, no one now expects that will be sufficient to get through 2010.
In fact, fiscal year 2009 ended Sept. 30 with a $1.4 trillion deficit, which demanded higher-than-expected Treasury borrowing. Most of that was due to the downturn in the economy and spending commitments in place before Barack Obama took office. And as much as Republicans point to the president’s economic recovery bill last February as the culprit, only a small share of that $787 billion package was spent by Sept. 30.

The picture in 2010 is different. The administration is predicting the stimulus will hit its stride with much more spending. And there will be a steady escalation of outlays driven by back-to-back increases in 2009 and 2010 appropriations for domestic agencies.

The White House has vowed to be more deficit conscious in its forthcoming 2011 budget due out in February. But the House could vote as early as Thursday on a $446.8 billion year-end package covering more than a dozen Cabinet departments and agencies and representing a healthy 9 percent to 10 percent increase over current spending for the same accounts.

For example, transportation and housing resources would grow by 12 percent, including $2.5 billion for high-speed-rail investments on top of the $8 billion already added by the White House to the giant stimulus bill in February. A $163.5 budget for the Departments of Labor, Health and Human Services, and Education would add an additional $8.6 billion to annual spending, and Veterans Health Administration spending would grow to $45.1 billion, a $4.1 billion increase.