North Koreans in misery as cash is culled 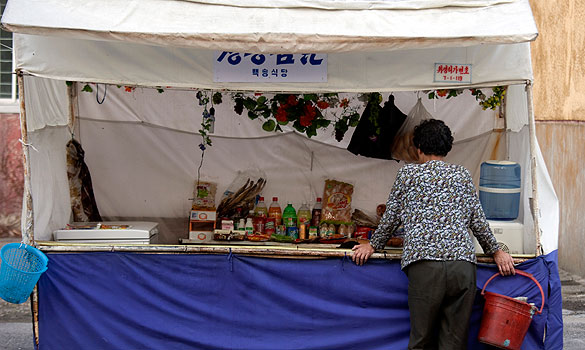 Street stalls usually offer one of the few glimpses of fiscal activity in Pyongyang ? but even they were closed for business by yesterday’s currency revaluation (Paul Rogers/The Times)

Shops and markets in North Korea have been closed and all cash transactions frozen after the Government’s shock announcement of a devaluation of its currency in an effort to crack down on the country’s burgeoning free-market economy.

In the capital, Pyongyang, yesterday only the few shops and restaurants permitted to trade in foreign currencies – patronised by the privileged elite and the city’s small foreign population – were open for business. All other enterprises and services based on cash, including markets, long-distance bus services, barbers’ shops, saunas and bath houses, were suspended until the revaluation of the won is completed next week.

There were reports of public outrage and confusion after the announcement of the measure, which requires North Koreans to swap existing won notes for new ones at an exchange rate of one to 100 – effectively knocking two zeroes off their value. Because of a cap of 100,000 won per family (£475 at the official exchange rate), anyone with significant holdings of cash will have their savings wiped out.

“Loud sounds of weeping in every house have not ceased since the news was released,” a South Korean website quoted an inhabitant of Sinuiju, a city on the border with China, as saying. “Weeping and fighting between couples has not stopped anywhere. The atmosphere of the city is terrible now.”

The website, dailynk.com, said that one elderly couple had killed themselves in North Hamgyong, a province adjacent to the Chinese border across which much illegal trading is carried out. It also reported anxiety among local officials that the currency revaluation would provoke civil unrest.

However, a Western diplomat in Pyongyang said that, apart from the closed shops, the announcement had had no visible effect. North Korea is one of the world’s most tightly controlled and brutal totalitarian states and public dissent is almost unknown.

The announcement was made on Monday via a closed-cable broadcasting system that is piped into all North Korean homes. It was not reported in the state media but was confirmed the following day in briefings to foreign diplomats in Pyongyang, who were summoned to the Foreign Ministry at 20 minutes’ notice.

“It came as a great surprise to everyone,” one Western diplomat in Pyongyang told The Times. “Everything closed – no notice given. When we made inquiries we discovered it was because the currency was no longer valid. It’s really quite dramatic.”

Households have been told that if they surrender their cash holdings this week, they will be given the new notes from Monday. Some reports suggested that, after protests from members of the elite, the limit on cash exchange had been raised to 150,000 won, and 300,000 won in bank deposits that would be made available after investigation into their source.

“One of the worries our North Korean staff have is whether they will have enough food to get through to next week,” the manager of a foreign organisation in Pyongyang said. “Our employees have access to foreign currency but most people don’t and they could be in trouble.”

The absence of commerce and its attendant clutter is one of the things that makes Pyongyang so unique among national capitals. Despite free-market reforms, most people still receive their basic food allowances from their workplace and, although there are shops and markets, they do not dominate, as they do in most modern cities.

The biggest shops, such as the No 1 Department Store, appear to be little more than showcases, intended to create a false impression of plenty and choice for the benefit of foreign visitors. The few examples of advertising to be seen in the city emphasise the absence of real capitalist activity. There are a handful of billboards for a car; a Fiat assembled under North Korean licence and never actually seen on the empty roads.

Small kiosks selling snacks and bottled drinks are to be seen along Pyongyang’s pavements. There are big markets, such as the one in the Tongil district of the city, where, in the past whisky, Japanese cigarettes and various goods imported from China could be bought, as well as food such as rice and kimchi (pickled cabbage); even dog meat. Yesterday, however, the Tongil market was closed – not because of any shortage of goods but because of the absence, for this week at least, of a currency.

The last time North Korea revalued its currency was in 1959. It changed its bank notes in 1992 but at a rate of one to one. As much as 300 won per person could be changed, with as much as 20,000 won accepted as savings deposits. In the end, though, much of that money was reportedly kept by the state-run banks.

– North Korea sharply revalues its currency by a factor of 100, causing chaos on the streets of Pyongyang