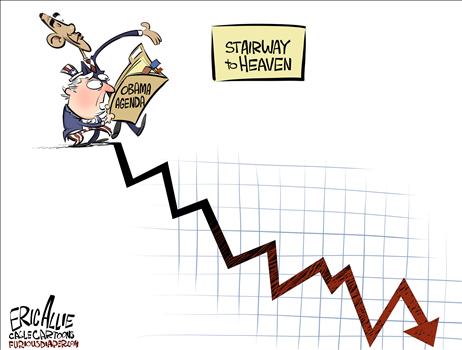 America is finally starting to wake up. Obama is just another elite puppet President.

Seventy-one percent (71%) of voters nationwide say they’re at least somewhat angry about the current policies of the federal government. That figure includes 46% who are Very Angry.

The latest Rasmussen Reports national telephone survey finds that only 27% are not angry about the government’s policies, including 10% who are Not at All Angry.

Men are angrier than women, and voters over 40 are more angry than those who are younger. A majority of those over 40 are Very Angry. Only 25% of under-30 voters share that view.

The data suggests that the level of anger is growing. The 71% who are angry at federal government policies today is up five percentage points since September.

Even more stunning, the 46% who are Very Angry is up 10 percentage points from September.

Among the nation’s Political Class, just six percent (6%) are angry. However, among those with more Mainstream, or populist, views, 85% are angry. A majority of Americans today hold views that can be described as Mainstream or populist. Very few align with the Political Class (see more information on this divide).

(Want a free daily e-mail update? If it’s in the news, it’s in our polls). Rasmussen Reports updates are also available on Twitter or Facebook.

Fifty-two percent (52%) of voters nationwide believe neither Republican nor Democratic political leaders have an understanding of what is needed today. That frustration is down eight points from 60% in September.

Sixty-five percent (65%) of Republicans and 59% of unaffiliated voters say that neither party has the answers. Those percentages are down significantly since September. Democrats remain fairly evenly divided as they were in September.

This unhappiness with government policies and leaders is reflected in numerous other Rasmussen Reports surveys. Americans, for example, now view being a member of Congress as the least respected job one can hold. President Obama’s job approval ratings also have suffered in the Rasmussen Reports daily Presidential Tracking Poll.

The latest numbers show that only nine percent (9%) of voters trust the judgment of America’s political leaders more than the judgment of the American people. Seventy-four percent (74%) place more trust in the wisdom of the crowd.

Seventy-one percent (71%) believe the federal government has become a special interest group that looks out primarily for its own interests. Sixty-eight percent (68%) believe that government and big business work together in ways that hurt consumers and investors.

Opposition to the health care plan proposed by the president and congressional Democrats remains high. Voters continue to oppose the government bailouts of General Motors and Chrysler, and a growing number now believe their taxes will go up during the Obama years.