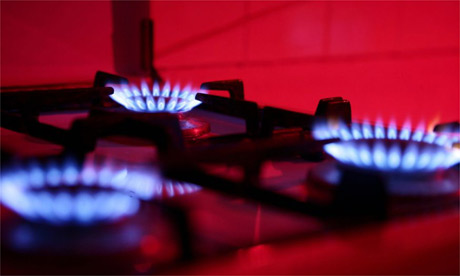 The UK could run out of gas within six hours this winter, the Observer has learned. The revelation has sparked a row between the Conservatives and Labour over who is doing more to keep the heating on. Last winter, the UK was left with only three days of reserves when foreign energy companies started exporting gas to supply their European customers after Russia cut supplies that used a pipeline through Ukraine.

A spokeswoman for Ed Miliband’s energy and climate change department said that under a civil contingency act he had the power to halt exports from the UK if the Queen had signed the order.

Charles Hendry, the shadow energy minister, told the Observer that the current minimum requirements on companies to keep gas in storage were not tough enough to safeguard the security of the UK’s energy supplies.

Labour hit back this weekend, accusing the Conservatives of “blighting progress” on building more gas storage facilities by blocking planning reforms proposed by the government.

If its storage facilities are full, the UK has enough gas supplies for about 16 days, based on average demand. France’s storage capacity would last a maximum of 91 days and Germany’s 73 days.

But National Grid has told energy companies that they only need to fill tanks by a minimum of 2.3% this winter. If all gas imports to the UK ground to a halt, for example if Gazprom turned off supplies to Europe, and supplies from the North Sea were disrupted, this amount would keep the country’s households and businesses supplied for just six hours on a cold day. In France, regulators require companies to keep their facilities at least 85% full from November.

Unlike France and Germany, the UK has direct access to dwindling gas fields in the North Sea which provide about half the country’s gas needs and ensure some security of supply. National Grid also said the government had powers in an emergency to order North Sea operators to boost production. But fields are already operating at 90% capacity.

UK energy companies do not have access to storage facilities in Europe, unlike their foreign counterparts.

National Grid said its minimum requirement for gas storage was based on ensuring the smooth and safe operation of the network, rather than security of supply. It said it had the power to slow the rate of withdrawal of supplies, but admitted it could not order companies to replenish stocks once tanks became depleted. Businesses could be cut off to keep households supplied, it added.

The system assumes the market will deliver sufficient supplies by sucking in gas to the UK when demand is high.

Hendry said: “We are concerned at the low levels of gas storage. Existing requirements on energy companies to maintain a minimum level of storage are clearly not sufficient to ensure the UK’s security of supply, especially as we become increasingly dependent on imported gas.”

A Labour spokeswoman said: “Alarmism from the Conservatives is designed to hide the fact that they have no coherent energy policy. As the North Sea gas declines, we need more gas storage, more import capacity and more low-carbon generation, all of which is happening. The Tories’ opposition to planning reform will blight progress on this and all the other low-carbon measures we need.”