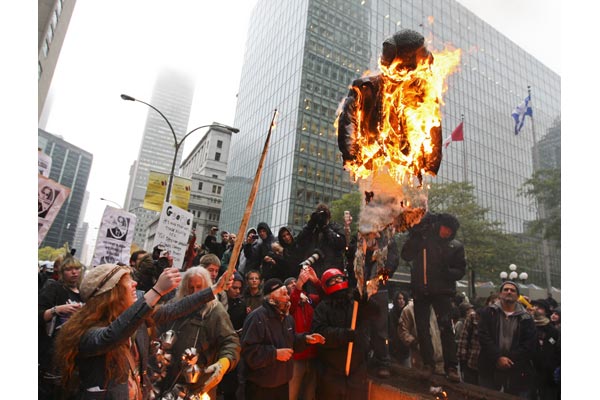 A day after an effigy of the Grim Reaper stalked his speech in Edmonton, Canada, former President George W. Bush was on the defensive over his personal salvation.

Speaking to a $400-a-seat crowd in Montreal, Bush told the roughly 1,000 attendees that his presidential decisionmaking was principled and moral.

“I am confident that I made decisions based on principle, that I made calls as best I could, and I did not sell my soul,” Bush said.

Outside his speech, the scene was anything but calm. A throng of protesters burned a flaming effigy of the former president, who’s taken his stump speech on the road across Canada. He’ll speak in three Canadian cities over a period of as many days.

Did he have regrets? an audience member asked.

“I spend a lot of time thinking about Katrina, and whether I could have sent in the federal troops right away, even though it was against the law,” Bush replied. He added he regretted the “Mission Accomplished” banner that accompanied him during a speech on an aircraft carrier after the early stages of his invasion of Iraq.