WTF! What is the point of having a balance sheet then?

Nama to fall outside national debt 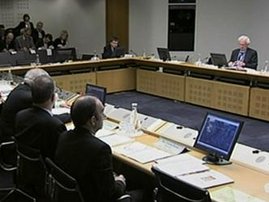 The European Commission is to allow Ireland keep the cost of funding the National Asset Management Agency (Nama) off its budgetary balance sheet, Minister for Finance Brian Lenihan said today.

Mr Lenihan said the Commission had accepted that Nama should be recorded outside the general government sector in the national accounts.

The decision by Eurostat means Nama will not increase the general government debt ratio and Ireland’s budget balance will not be directly affected by Nama.

“The preliminary decision of Eurostat means that the acquisition of the assets from the financial institutions by Nama may be treated as off-balance sheet in the budgetary arithmetic under European national accounting rules,” Mr Lenihan said in a statement.

Under the terms of the National Assets Management Agency Bill 2009, the agency will request that each financial institution create so-called special purpose vehicle (SPV) firms to work on the loans within each of the lenders.

“This has the very important effect of putting the treatment of the Irish asset protection scheme on an equal footing with bank support schemes in other member states, which are also being recorded,” Mr Lenihan said.

“The board of Nama will hold a veto on the operations of the special purpose vehicle through the shareholding agreement.”