The trigger was that a cyclist wanted to file charges against a police officer, because he saw how a friend was rudely arrested. 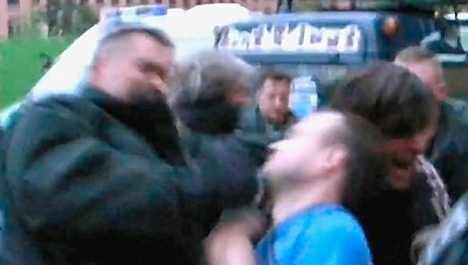 Berlin police are investigating some of their officers after witnesses filmed them beating a demonstrator at a protest against government infringement of Germany’s data protection laws.

The video, which appeared on YouTube, shows an officer hitting a man in the face before several other officers help pull him to the ground with more punches and kicking. Another man caught in the middle of the scuffle sustained a bloody nose.

State criminal prosecutors are working feverishly to investigate the incident and officers are suspected of assault while on duty, a police spokesman said. He added, however, that the video was problematic because it does not show the events that led to the violence.

The event under the motto “Freedom instead of fear – stop the surveillance madness,” was attended by some 10,000 participants, though organisers said more than 20,000 were on hand to protest laws that enable authorities to shut down websites and hold users’ personal telephone data. The event, part of a series held around the world, was called by a coalition of 167 organisations – including political parties, trade unions, professional associations, capitalism critics Attac, and the Chaos Computer Club.

According to police, the event was largely peaceful, but said the moment of violence captured on tape happened after a group of some 700 anarchists tried to deviate from the planned demonstration route in the Kreuzberg district. Police blocked the way, which inspired a demonstrator sound truck to call participants to criminal action. As officers addressed the truck, they were barraged with bottles from the crowd that did not result in injuries.

One 37-year-old man, identified by police as the person beaten in the video, was allegedly disruptive and did not leave despite repeated requests by police, they said. Witnesses said he had apparently wanted to register a complaint against one officer, who had allegedly arrested his friend “under unfriendly circumstances,” but police did not confirm this.

“The 37-year-old sustained injuries to his face during his arrest and was treated in a hospital,” the spokesperson said.

After the scuffle, other demonstrators can be heard shouting, “We are peaceful, what are you?” at officers.

Green Party MP Christian Ströbele told daily Kölner Stadt-Anzeiger on Monday that he questioned police behaviour in the incident after accompanying the demonstration for several hours without witnessing any violence.

“The demonstration was absolutely peaceful, it couldn’t have been more peaceful,” he told the paper.