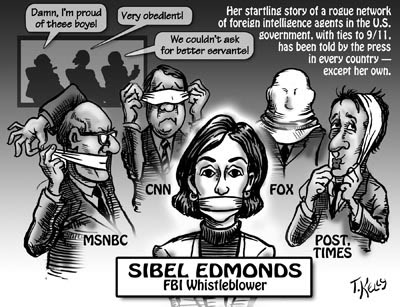 Over 24 hours have passed since the video and full transcript of Sibel Edmond’s deposition have been made public, giving even the most stupid and lazy journalist the time to either watch the video or read the transcript. This morning, I decided to check what Google News would find for me. I simply typed “Sibel Edmonds” and hit enter. Here are the results: 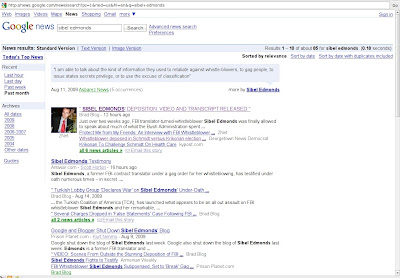 Now, I cannot say that I was expecting a tsunami of reports, but still, nothing. Almost nothing at all! Take a look for yourself (click on the pic for a higher resolution). What do you see?

The Brad Blog. Well, yes, since Brad Friedman has been following this story from the very beginning and since his blog is, along with Lukery’s “Let Sibel Speak“, the unofficial “Sibel news” blog.

That’s it. Absolutely nothing from the corporate press. Not a single word, not even on page 23…

Think of some of the possible news headlines which could have legitimately been made with Sibel’s testimony:

Surely, if the corporate media is in the business of selling stuff, then such catchy headlines are just any editor’s wet dream, no?

Among the many lessons of the Sibel Edmonds case is the incontrovertible proof that the corporate media is not in the business of selling anything, at least not primarily. Selling news is only a subsidiary goal of the corporate press, but its real mission is to make people stupid and ignorant and, once this goal is reached, to keep them this way. Either that, or it is so terrified of the puppeteers which run the official government in the USA that they rather sacrifice a fantastic marketing opportunity than incur the wrath of the US “deep state” and the Nomenklatura which supports it.

But the silence on the Sibel Edmonds case does not stop with the corporate media. Almost the same picture can be observed in the free press, independent press, blogosphere etc.

Yesterday, Amy Goodman found the time to report about “EPA Fails to Inform Public About Weed Killer in Drinking Water” but not about the Edmonds case, not even in the short news section (It would be interesting to compare the number of stories DemocracyNow had about Sibel Edmonds in, say, the past year or two with the number of stories they had about homosexuals and their “rights”). A quick look at Commondreams.org this morning also shows nothing about Sibel Edmonds.

Frankly, at this point I intended to list all the “alternative” websites which had nothing about Sibel, but I felt so embarrassed for them, that I decided to refrain from doing so. While some are clearly in the “opposition business”, others are the “real thing” and I don’t want to offend anybody for what could be an innocent oversight. But still, the bottom line terrible: Sibel’s truly heroic efforts are almost totally ignored by the free, alternative or independent press.

I don’t believe that it is morally correct to simply accuse everybody of being hypocrites, nor do I believe that nobody really cares. They care, a lot, in fact. No, my explanation for what is going on is very different: the “free, alternative and independent” media is also largely dependent on the corporate press to gather it’s news stories. And that, if true, is really frightening.

There are all sorts of possible explanations for this state of affairs, ranging from the simple laziness of some reporters to the way search engines work. Whatever the true reason(s) for this – the case of Sibel Edmonds should serve as a warning to all of us: the Empire can still has formidable means to prevent us from learning the truth about what is happening behind the scenes.