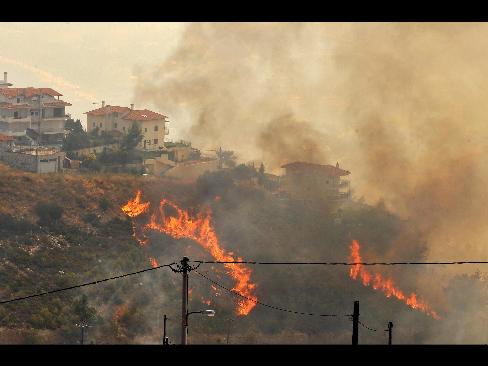 Fire approaches houses in the suburb of Drafi, on the mount of Penteli, in Greece on Aug. 23, 2009. Photographer: Louisa Gouliamaki/AFP/Getty Images

Aug. 23 (Bloomberg) — Greek firefighters battled a wildfire on the outskirts of the capital Athens that threatened outlying suburbs for a second day, while authorities evacuated hospitals, camping grounds and retirement homes overnight. No casualties were reported.

‘The strength of the winds has increased and the situation remains particularly difficult,” Fire Department spokesman Ioannis Kapakis said in televised statements on NET. From 6:00 a.m. yesterday to 6:00 a.m. today, 83 major fires were reported around the country, with blazes on the islands on Zakynthos, Evia and Skyros among another five considered to be of serious concern, he said.

No casualties have been reported and no tally of property damage has been made available. Greek media have reported dozens of homes have been damaged. Authorities, which declared a state of emergency for the region yesterday, evacuated children’s hospitals and retirement homes overnight as a precautionary measure as the biggest fire in the country this season approached Athens. Unnamed municipal officials ordered the evacuation of 10,000 residents of the Agios Stephanos suburb, Associated Press reported today.

The fire reached as close as the courtyard of the Penteli children’s hospital, which had been earlier evacuated, Sgouras said. Flames licked the courtyard of a monastery in Pendeli, a wealthy wooded outer suburb of Athens, NET reported. The Church of Greece offered lodging, food and water to those residents who fled the flames, according to an e-mailed statement.

Seventeen planes and seven helicopters began water-bombing the front of the fire early again today, to be joined by two airplanes from Italy and France and a helicopter from Cyprus, after the country asked for European Union assistance, according to Kapakis. Cyprus is also sending 60 firefighters and four engines, Kapakis said. Israel has also extended offers of assistance, according to NET.

More than 1,000 firefighters, including soldiers, were involved in battling the blazes. The fire, which began at Grammatikos, about 40 kilometers northeast of the capital on the evening of Aug. 21, has spread with the help of strong, swirling winds. Police spokesman Panagiotis Stathis today urged Athenians planning to return to the capital to put off their plans to keep roads free and said civil servants who don’t report for work tomorrow won’t be penalized.

Greece suffers dozens of fires daily over the summer period with most being brought under control in a matter of hours. Two years ago this month, scorching temperatures and high winds combined to cause over 250 blazes, which killed 65 people and destroyed 250,000 acres of forest and farmland. The country declared a national emergency on Aug. 25, 2007, deploying nearly 15,000 firefighters to put out the flames. The blazes left 2,500 people homeless.

To contact the reporter on this story: Maria Petrakis in Athens at mpetrakis@bloomberg.net.