From the article: “In July 2008 on the campaign trail, Obama called for a “civilian national security force that’s just as powerful, just as strong, just as well funded,” as the U.S. military.” 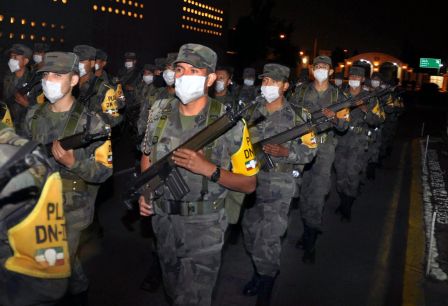 Georgia Congressman Paul Broun warned attendees of a town hall event Tuesday that the Obama administration was planning to use a pandemic or a natural disaster to implement martial law in the United States.

Speaking at the North Georgia Technical College auditorium, Broun said that the “socialistic elite,” as well as Obama, Nancy Pelosi and Senate Majority Leader Harry Reid, were planning to exploit a crisis to create a favorable climate for their stalling political agenda.

“They’re trying to develop an environment where they can take over,” he said. “We’ve seen that historically.”

Broun’s warning arrives on the back of a letter sent by The National Governors Association to the Pentagon last week, which condemns the military’s plans to usurp domestic control of National Guard and federal forces deployed in the event of a natural disaster or terrorist attack.

In December 2008 it was announced that at least 20,000 more active duty soldiers will be placed inside the United States under Northcom to “help state and local officials respond to a nuclear terrorist attack or other domestic catastrophe.”

“Domestic emergency deployment may be “just the first example of a series of expansions in presidential and military authority,” or even an increase in domestic surveillance, warned Anna Christensen of the ACLU’s National Security Project. And Cato Vice President Gene Healy warned of “a creeping militarization” of homeland security.”

The contention that the troops will merely help “recovery efforts” after a major catastrophe is contradicted by the fact that Northcom itself, in a September 8 Army Times article, said the first wave of the deployment, which was put in place on October 1st at Fort Stewart and at Peterson Air Force Base in Colorado Springs, would be aimed at tackling “civil unrest and crowd control”.

Congressman Broun has been a thorn in the side of Obama’s agenda since day one, voting against the “cap and trade” bill and slamming the entire concept of man-made global warming as a “hoax”.

He also spoke out against Obama’s plan to create a “national civilian security force,” warning that the program sounded like a 21st century Gestapo and that it was part of a move towards a Marxist dictatorship.

“That’s exactly what Hitler did in Nazi Germany and it’s exactly what the Soviet Union did,” Broun said. “When he’s proposing to have a national security force that’s answering to him, that is as strong as the U.S. military, he’s showing me signs of being Marxist.”

Broun also cited the threat to the second amendment posed by the Obama administration and anti-gun Attorney General Eric Holder.

“We can’t be lulled into complacency,” Broun said. “You have to remember that Adolf Hitler was elected in a democratic Germany. I’m not comparing him to Adolf Hitler. What I’m saying is there is the potential of going down that road.”

MSNBC’s Keith Olbermann voted Broun his “worst person in the world” on two separate occasions and attacked the Congressman as a racist and a bigot for expressing worries about the porous border with Mexico in relation to the swine flu outbreak. Olbermann claimed that Broun had “exploited a dead baby” to make his “sick, xenophobic and utterly irrelevant case about immigration.”

In November 2008, Olbermann erroneously claimed that Obama had called for a “civilian reserve corps” and “federally funded construction workers” when he had actually announced a plan for a “national security force,” as this video shows. Olbermann attacked Broun for expressing concerns about the program.

In July 2008 on the campaign trail, Obama called for a “civilian national security force that’s just as powerful, just as strong, just as well funded,” as the U.S. military.