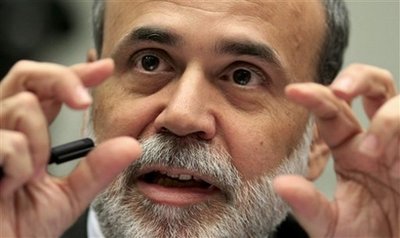 Federal Reserve chairman Ben Bernanke was confronted yesterday by Congressman Alan Grayson about which foreign banks were the recipients of Federal Reserve credit swaps, but he was unable to provide an answer as to where over half a trillion dollars had gone.

Asked which European financial institutions received the money, which was handed out by The Federal Open Market Committee (FOMC), a component of the Federal Reserve System, Bernanke responded, “I don’t know.”

“Half a trillion dollars and you don’t know who got the money?” asked Grayson.

As we have previously reported, the destination of trillions in bailout funds remains hidden after the Fed refused to disclose where it had gone despite a lawsuit filed by Bloomberg.

Bernanke said the Fed had a “long standing legal authority” to hand money to foreign banks under section 14 of the Federal Reserve Act, a claim contradicted by Bernanke’s own report, as Grayson soon highlighted.

Grayson said that he had investigated one of the arrangements, a $9 billion dollar package to New Zealand, which works out at $3000 dollars for every citizen of New Zealand.

“Seriously, wouldn’t it have been better to extend that kind of credit to Americans rather than New Zealanders,” said Grayson.

The Congressman then implied that handing money to foreign institutions was unconstitutional, reading from Article I, “No money shall be drawn from the treasury, but in consequence of appropriations made by law.”

“Do you think it’s in the spirit of the Constitution for a group like the FOMC to hand out a half a trillion dollars to foreigners without any action by this Congress?” asked Grayson, to which Bernanke responded that Congress had approved it with the Federal Reserve act of 1913. Grayson responded that in 1913, the entire GDP of the U.S. was well under half a trillion dollars.

“Is it safe to say that nobody in 1913 contemplated that a small little group of people would decide to hand out half a trillion dollars to foreigners?,” asked Grayson, to which Bernanke again claimed that the authority had been used numerous times before.

Grayson debunked this claim by pointing to Bernanke’s own report, which stated that the entire amount had been handed out starting from the last quarter of 2007, and the amount given out before that to foreign banks was zero.