Some E-Books Are More Equal Than Others

EDITOR’S NOTE | 8:41 p.m. The Times published an article explaining that the Orwell books were unauthorized editions that Amazon removed from its Kindle store. However, Amazon said it would not automatically remove purchased copies of Kindle books if a similar situation arose in the future.

This morning, hundreds of Amazon Kindle owners awoke to discover that books by a certain famous author had mysteriously disappeared from their e-book readers. These were books that they had bought and paid for-thought they owned.

But no, apparently the publisher changed its mind about offering an electronic edition, and apparently Amazon, whose business lives and dies by publisher happiness, caved. It electronically deleted all books by this author from people’s Kindles and credited their accounts for the price.

This is ugly for all kinds of reasons. Amazon says that this sort of thing is “rare,” but that it can happen at all is unsettling; we’ve been taught to believe that e-books are, you know, just like books, only better. Already, we’ve learned that they’re not really like books, in that once we’re finished reading them, we can’t resell or even donate them. But now we learn that all sales may not even be final.

As one of my readers noted, it’s like Barnes & Noble sneaking into our homes in the middle of the night, taking some books that we’ve been reading off our nightstands, and leaving us a check on the coffee table.

You want to know the best part? The juicy, plump, dripping irony?

The author who was the victim of this Big Brotherish plot was none other than George Orwell. And the books were “1984” and “Animal Farm.”

1984 and Animal Farm in one book at Amazon.com 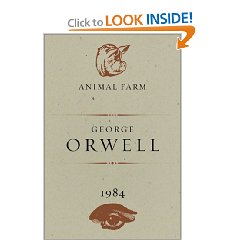