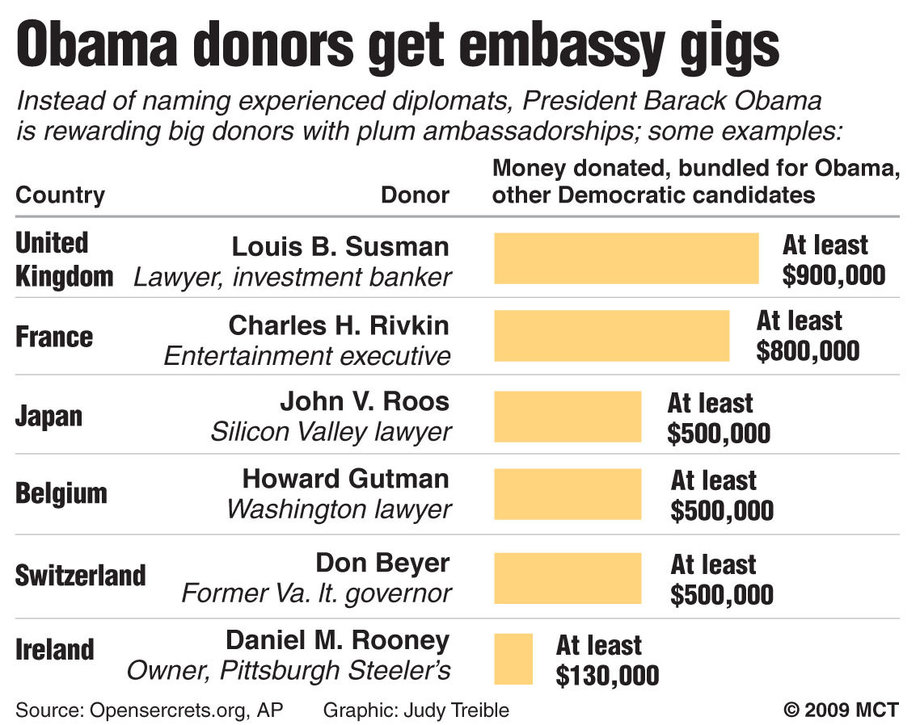 So far, Obama’s contributors and friends have been awarded with plum posts in Canada, France, England, Japan, South Africa, Ireland, the Bahamas, Denmark, Argentina and the Vatican.

The Obama administration says that all of its appointees are qualified, but critics say the jobs should go to career diplomats instead of party loyalists.

“It is the last vestige of the spoils system,” said Ronald Neumann, president of the American Academy of Diplomacy.

“We made it illegal to do this for our civil service on the basis that merit was important,” Neumann said. “We don’t do it for our military. And it is a little perplexing why we think that we should we able to sell ambassadorships.”

According to an analysis by the Center for Responsive Politics, which tracks money in politics, Obama has rewarded some of his largest fundraisers and donors with posts abroad.

Obama’s appointments would appear to contradict statements he made as a presidential candidate. Promising the most sweeping ethics changes in history, Obama said he’d impose a “litmus test” in his administration, where employees are hired based on their qualifications and experience, not on their party or ideology.

Calling President George W. Bush’s White House “the most politicized” in history, Obama decried the appointment of Bush’s friend Michael Brown to head the Federal Emergency Management Agency. Brown, or “Brownie,” as Bush called him, had served as a commissioner with the International Arabian Horse Association but had no experience in emergency management. He initially led the federal government’s response to Hurricane Katrina.

“The days of Michael Brown, Arabian horse judge, are over,” Obama said in a speech two years ago.

John Naland, the president of the American Foreign Service Association, said the federal government’s response to Hurricane Katrina showed the need to have competent managers in charge of America’s embassies. He said it makes no sense to dispatch envoys who lack experience and have never dealt with special operations, anti-drug campaigns or military issues.

“If this policy continues sending out people who are basically just fundraisers, someday something bad is bound to happen,” Naland said.

He said the system of appointing political ambassadors is unique to the U.S., and that it has become more of a concern since the attacks of Sept. 11, 2001.

“The rest of the world doesn’t do this. Our friends don’t do it, our enemies don’t do it,” Naland said. “In the United States, 150 years ago, every job was political patronage: the Post Office, military commanders in the Civil War and everything. But our country over the years has backed away from that.”

White House spokesman Robert Gibbs told reporters that the president essentially acknowledged after his election that some of his foreign service picks would be political appointees.

Gibbs said the administration’s ambassadorial appointments include “a group of committed individuals and proven professionals that are eager to serve their country.”

“Some of those individuals were fundraisers; some of those were career ambassadors,” Gibbs said at a news briefing in late May. He joked that the U.K. ambassador was qualified because “he speaks English.”

Obama surprised some last month when he appointed Utah Republican Gov. Jon Huntsman – far from a Democratic crony – as ambassador to China. Huntsman is a former ambassador to Singapore, speaks Mandarin, worked as deputy trade representative in Asia and was a Mormon missionary in Taiwan.

Since the early 1960s, roughly a third of all ambassadors have been non-professionals, according to the American Academy of Diplomacy. In a letter to Obama, the group asked that the number be reduced to 10 percent.

Neumann said it’s disappointing but not surprising that Obama is seeking to reward heavy-hitting fundraisers early in his administration.

“It’s a little early to say whether the administration will or won’t be different from others in its overall appointments and totals, but certainly it’s not change yet,” he said.

The job of an ambassador is becoming more complicated and requires experience, Neumann said. He also said it’s an insult to the host country when an ambassador lacks knowledge of the country’s history, language and culture.

“Why do you think that diplomacy is so much simpler than, say, being a journalist?” he asked. “Why do you assume it takes no knowledge of the profession in order to handle your foreign relations at a time when you’re dealing with crises, terrorism, epidemics and a generally difficult world?”

Obama’s appointments have raised eyebrows around the globe.

“No ‘change you can believe in’ for Obama,” blared a French headline on a story about the president’s ambassadorial appointees.

A story in the Japan Times lamented the appointment of “a virtually unknown lawyer” as the ambassador to Japan.

The newspaper called it “ronkokosho,” a reward given for support in a presidential campaign.