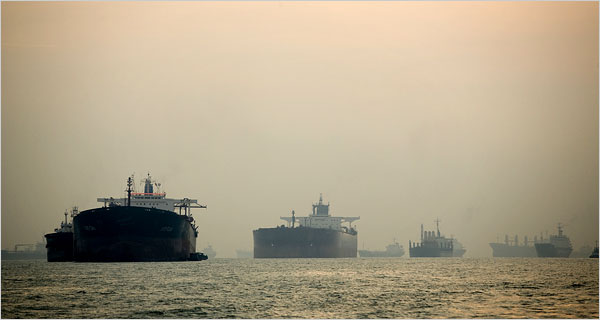 More worrisome, despite some positive signs like a Wall Street rally and slower job losses in the United States, is that the current level of trade does not suggest a recovery soon, many in the shipping business say.

“A lot of the orders for the retail season are being placed now, and compared to recent years, they are weak,” said Chris Woodward, the vice president for container services at Ryder System, the big logistics company.

Western consumers still adjusting to losses in value of their stocks and homes are in little mood to start spending again on nonessential imports, said Joshua Felman, the assistant director of the Asia and Pacific division of the International Monetary Fund. “For trade to pick up, demand has to pick up,” he said. “It’s very difficult to see that happening any time soon.”

So badly battered is the shipping industry that the daily rate to charter a large bulk freighter suitable for carrying, say, iron ore, plummeted from close to $300,000 last summer to a low of $10,000 early this year, according to H. Clarkson & Company, a London ship brokerage.

The rate has rebounded to nearly $25,000 in the last several weeks, and some bulk carriers have left Singapore. But ship owners say this recovery may be short-lived because it mostly reflects a rush by Chinese steel makers to import iron ore before a possible price increase next month.

The cost of shipping a 40-foot steel container full of merchandise from southern China to northern Europe tumbled from $1,400 plus fuel charges a year ago to as little as $150 early this year, before rebounding to around $300, which is still below the cost of providing the service, said Neil Dekker, a container industry forecaster at Drewry Shipping Consultants in London.

Eight small companies in the industry have gone bankrupt in the last year and at least one of the major carriers is likely to fail this year, he said.

Vessels have flocked to Singapore because it has few storms, excellent ship repair teams, cheap fuel from its own refinery and, most important, proximity to Asian ports that might eventually have cargo to ship.

The world’s fleet has nearly doubled since the early 1980s, so the tonnage of vessels in and around Singapore’s waters this spring may be the highest ever, he said, cautioning that detailed worldwide ship tracking data has been available only for the last five years.

These vessels total more than 41 million tons, according to the AIS Live tracking service. That is nearly equal to the entire world’s merchant fleet at the end of World War I, and represents almost 4 percent of the world’s fleet today.

Investment trusts have poured billions of dollars over the last five years into buying ships and leasing them for a year at a time to shipping lines. As the leases expire and many of these vessels are returned, losses will be heavy at these trusts and the mainly European banks that lent to them, said Stephen Fletcher, the commercial director for AXS Marine, a consulting firm based in Paris.

In previous shipping downturns, vessels anchored for months at a time in Norwegian fjords and other cold-weather locations. But stringent environmental regulations in practically every cold-weather country are forcing idle ships to warmer anchorages.

But that raises security concerns. Plants grow much faster on the undersides of vessels in warm water. “You end up with the hanging gardens of Babylon on the bottom and that affects your speed,” said Tim Huxley, the chief executive of Wah Kwong Maritime Transport, a shipping line based in Hong Kong.

One of the company’s freighters became so overgrown that it was barely able to outrun pirates off Somalia recently, Mr. Huxley said. The freighter escaped with 91 bullet holes in it.

Another of the company’s freighters close to Singapore was hit last December by a chemical tanker that could not make a tight enough turn in a crowded anchorage; neither vessel was seriously damaged.

Capt. M. Segar, the group director for the hub port of the Maritime and Port Authority of Singapore, said in a written reply to questions that many vessels were staying just outside the port’s limits. They do not have to pay port fees there.

Singapore has reported to the countries of registry for administrative action about 10 to 15 ships that have anchored in sea lanes in violation of international rules in the last two weeks, Captain Segar said.

Ships are anchoring at other ports around the world, too. There were 150 vessels in and around the Straits of Gibraltar on Monday, and 300 around Rotterdam, the Netherlands, according to the AIS Live tracking service.

But Singapore, close to Asian markets, has attracted far more.

“It is a sign of the times,” said AIS Martin Stopford, the managing director of Clarkson Research Service in London, “that Asia is the place you want to hang around this time in case things turn around.”

1 thought on “Hundreds of Cargo Ships Treading Water Off Singapore, Waiting for Work”