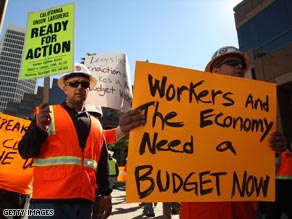 California lawmakers resumed negotiations late Tuesday after the longest legislative session in state history over the weekend resulted in a budget impasse.

“Every state employee who receives a salary under the general fund is affected, and the governor began issuing layoff notices for the least-senior employees in various agencies,” said Aaron McLear, the governor’s press secretary.

The layoffs would begin on July 1, which marks the fiscal year, and includes jobs in the Departments of Health and Human Services and Corrections, among others, McLear said. Another 10,000 layoff notices could be issued on Wednesday in other departments, he said.

The governor, facing a $42 billion deficit, was prompted to move on the layoff notices after lawmakers missed a Monday night deadline to reach a budget deal, McLear told CNN late Monday.

The Republican governor, who declared a fiscal emergency in December, has butted heads for months with the Democratic majority over alleviating the state’s $11.2 billion revenue shortfall this fiscal year alone. The cuts would save California $750 million for the year. The state’s $42 billion deficit is for the current and next fiscal years. iReport.com: What you’d fix first

Schwarzenegger warned lawmakers about the cuts last week, urging them to approve the latest budget proposal. However, voting was stalled over a 30-hour weekend session as the legislature mulled over 26 pieces of legislation that make up the budget package.

The State Assembly in Sacramento postponed action until Tuesday. A single Republican vote was holding the budget from passing with a two-thirds majority, McLear said. The cuts wouldn’t begin until the start of the fiscal year on July 1, starting with employees with the least seniority.

On Tuesday, Kansas managed to work through its budget issues, which had forced the state to suspend tax refunds and caused concern it would not be able to to pay state employees.

But Gov. Kathleen Sebelius ended the budget impasse by signing a bill to balance the budget, according to CNN affiliate KMBC-TV.

The signing of the bill was a key demand for Republicans who had been blocking the Democratic governor’s plan to transfer $225 million into the state’s main bank account from other state government accounts.

With her signature, Sebelius ended a cash crunch a half-hour before a key payroll budget deadline.

KMBC reported the state’s 42,000 employees should receive their biweekly paychecks on time Friday.

With Sebelius’ signature on the bill, the state may not have had enough money to pay state employees, or provide money for schools and health-care providers. Kansas also stopped processing income tax refunds last week because of low funds, said Department of Administration spokesman Gavin Young.

“This political game the Republican leaders are playing affects real Kansas families,” Sebelius had said Monday in a written statement. “The Republican legislative leadership is jeopardizing our citizens’ pocketbooks for no other reason than to play political games — games in which the only ones set to lose are Kansas families, workers and schools.”

Young said as of Monday, Kansas only had $10 million in its general fund. The state has some 42,000 full-time employees, but about 55,000 paychecks are affected, he said.

And the economic woes are also a problem for neighboring Colorado. State workers may face unpaid time off in an effort to spare Colorado’s colleges and universities millions of dollars in budget cuts, KUSA-TV reported Tuesday. Interactive: Estimated job growth across the country

Gov. Bill Ritter, a Democrat, announced plans recently to furlough some state workers in an effort to balance the budget. There is roughly $600 million in budget cuts that need to be made by the end of this fiscal year in June, according to KUSA.

State lawmakers will debate a bill in the House later this week that would require furloughs for state workers depending on how much money they make.

In Washington state, KOMO-TV reports that proposed budget cuts have led to protests in its capital, Olympia.

State officials are looking at some $300 million in cuts as part of a package the governor is expected to sign this week. Lawmakers are also aiming to cut nearly $6 billion over the next two years.

But about 100 union members, state employees, school supporters and health-care providers rallied on the lawn of the Capitol, telling lawmakers to stop the budget cuts to health care and education and prevent tuition hikes. State employees say they want fair pay, better benefits and pensions and no layoffs.

“We’re in challenging times, and I think the government needs to be looking at things in a new way,” Rodolfo Franco, president of the Local 304 chapter of the Washington Federation of State Employees, told KOMO.

The budgetary woes are also affecting Hawaii, a state heavily dependent on tourism and hospitality that is typical hit hard by a recession.

Hawaii faces a nearly $2 billion budget shortfall in the upcoming fiscal year. That figure has led legislators to seek alternative ways of balancing the budget, including possible reductions in health and retirements benefits for government workers, KHNL-TV in Honolulu, Hawaii, reported Tuesday.

One bill being debated in the legislature aims to cut off insurance benefits for all employees retiring after July 1 regardless of how many years the employee earns.

On the East Coast, states including New York and Florida, which have high unemployment rates and huge budget shortfalls, are also looking to cut programs.

Watch more on how the stimulus plan will work »

In New York, the expected budget shortfall is around $1.7 billion, according to the National Conference of State Legislatures.

President Obama took his economic stimulus message to Florida last week to hard-hit Fort Myers. The jobless rate in the area is 10 percent, up from 2.3 percent this time in 2006, and the area’s foreclosure rate of 12 percent is the highest in the nation.

Interactive: See where the stimulus money is going »

And Michigan’s Democratic Gov. Jennifer Granholm, whose state has been especially hard-hit by the recession and the near-collapse of its auto industry, says job creation is paramount to turning the economy around.

“We see the impact of this every day, and I’m speaking not just for Michigan, but for governors across the country. We need help. We need it now. And it’s not about budgets; it’s about creating jobs in our states,” she said recently on CNN’s State of the Union with John King.

That sentiment is echoed by nearly every governor, as witnessed by an urgent statement put out by the National Governors Association in late January.

“States are facing fiscal conditions not seen since the Great Depression — anticipated budget shortfalls are expected in excess of $200 billion. To address these shortfalls and meet balanced budget requirements, states have begun taking action to cut government services or increase revenue. Absent federal action, states will have to take even stronger actions that will make the recession more severe and slow the nation’s economic recovery,” the group said in a letter released January 27