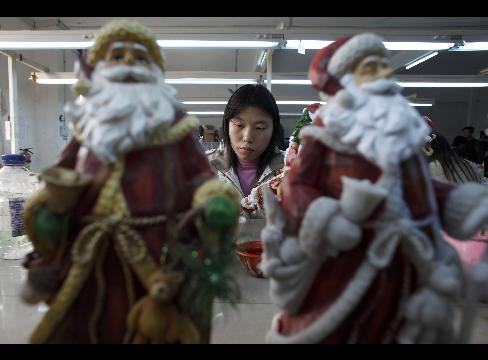 A worker paints petroleum resin-based Christmas figurines at a factory on the outskirts of Guangzhou, China, on Feb. 4, 2009. Photographer: Qilai Shen/Bloomberg News

Feb. 11 (Bloomberg) — China’s exports fell by the most in almost 13 years as demand dried up in the U.S. and Europe and imports plunged by a record, signaling a deepening slump in the world’s third-biggest economy.

Outbound shipments declined 17.5 percent in January from a year earlier and imports fell 43.1 percent, the customs bureau said on its Web site today. Both numbers were worse than economists’ forecasts.

The $39.1 billion trade surplus, the second biggest on record, may add to international tensions as global leaders warn of the risk of protectionism amid the worst financial crisis since World War II. China’s economic growth is likely to cool to 6.1 percent this quarter, the least since 1999, according to a Bloomberg News survey. The slowdown has cost 20 million jobs and increased the risk of falling prices, profits and consumption.

“It’s a very eye-catching trade surplus and people will ask how it can be so high at a time that everybody else’s economy is suffering,” said Dariusz Kowalczyk, chief investment strategist at SJS Markets Ltd in Hong Kong. “What’s happening here is really dramatic, underscoring plunging global demand.”

Falling commodity prices drove down import costs as China’s demand for raw materials also faltered because of the export slowdown and a property slump. The value of crude-oil imports fell 57 percent from a year earlier.

The trade slump was likely exacerbated by a week-long Lunar New Year holiday, which occurred in January this year and February last year.

China’s economy grew 6.8 percent from a year earlier in the fourth quarter, the weakest pace since 2001. Producer prices fell the most in almost seven years in January, data released yesterday showed.

The trade collapse adds pressure on the government to expand a 4 trillion yuan ($585 billion) stimulus package as factories close and millions of migrant workers return to the countryside, adding to the risk of social unrest.

“Policy makers should continue to ease monetary policy and to come out with policies to stimulate consumption and stimulate property transactions,” said Frank Gong, head of China research at JPMorgan Chase & Co. in Hong Kong.

The government should cut the key one-year lending rate by more than 100 basis points this year from 5.31 percent, reduce taxes and distribute discount coupons to encourage spending, Gong said. Export demand is out of its control and wouldn’t be revived by depreciating the nation’s currency, he said.

Government researchers have advocated weakening the yuan to support exports. China should “actively guide” the yuan to about 6.93 against the dollar to aid growth and bolster employment, according to a report by the Ministry of Finance’s research institute published Feb. 7.

U.S. Treasury Secretary Timothy Geithner said yesterday that the new administration is yet to decide whether China is manipulating its currency. He added that China was an important force for global economic stability and “it is in the interests of the United States to work closely with them.”

Rising protectionism may make it “even more difficult for China to have an export recovery any time soon,” according to Isaac Meng, a senior economist at BNP Paribas SA in Beijing.

He cited “Buy American” provisions in a U.S. economic stimulus package, watered down after warnings from President Barack Obama and foreign leaders that they risked triggering a trade war.

China is relying on a stimulus package spanning spending through 2010 on public housing, railways, highways, airports, and power grids to revive growth. The plan helped to drive bank lending to a record in January, according to the official China Securities Journal.

A revival of import demand will be “one of the tests of whether China’s fiscal package is successful or not,” said Stephen Green, a Shanghai-based economist at Standard Chartered Bank Plc.

The government invested 100 billion yuan of the stimulus money in the fourth quarter and is spending 130 billion yuan this quarter, the official Xinhua News Agency reported Feb. 3.

To contact the reporters on this story: Kevin Hamlin in Beijing at khamlin@bloomberg.net