As many as 40 million Chinese who moved from the country to the city to find work are expected to lose their jobs this week as the New Year celebrations come to a close. 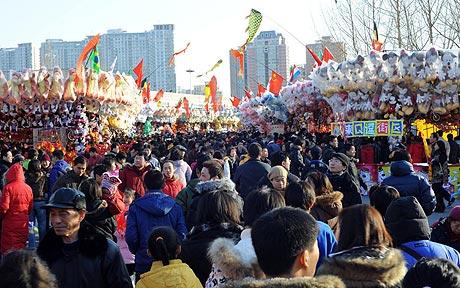 Chinese visitors celebrate the first day of the Lunar New Year festival at a park carnival in Beijing Photo: AFP

Instead of returning to work after the public holiday, many will remain in their remote rural homes, having been told not to come back.

Others will make the long journey to China’s economic heartlands only to find their source of income has evaporated.

The gloomy prediction came from an official at the Central Communist Party School, who estimated that between 20 and 30 per cent of the 130 million provincial Chinese who moved to the city for employment would find themselves obsolete.

To make matters worse, they will find no guarantee of work at home as sophisticated farming methods reduce the need for labourers and agricultural hands.

In Shanghai, the New Year was ushered in with an unparalleled pyrotechnic display as the population let off steam.

Firework sales rose by a third from last year, and it took more than 30,000 street sweepers to clear the 1,200 tonnes of debris from the streets.

But even in China’s financial capital, a sober mood emerged as the economy continued slowing down, raising fears that it may have ground to a halt entirely in the last quarter of 2008.

His warning spurred some to ignore the holiday and try to make themselves indispensable.

Fen Yi, a 26, software developer said: “One of my New Year resolutions is not getting sacked. I am working again on the fourth day of the Chinese New Year, giving up my holiday time.

“The unemployment rate is rising and the economy is falling, 2009 will be a dangerous year for China, and a sensitive year with all the anniversaries coming up, like the one for the riots in Tiananmen Square. “The general mood is not as bullish as it is supposed to be for the year of the Bull.”

In the southern province of Guangdong, where millions of factory workers have lost their jobs, a daily queue has started to form in front of a giant golden bull: one of capitalism’s most potent symbols.

The Charging Bull, a three-tonne sculpture cast in the 1980s to symbolise the might of Wall Street, may be tarnished in the eyes of the West.

But a replica of the statue at Changlu Farm in Shunde is attracting tens of thousands of Chinese visitors every day, hoping for a touch of luck in the coming year.

“The Wall Street bull is famous and influential,” said He Siyuan, the manager of the farm. “It’s very impressive, so we built our own and organised a ‘touch the gold bull, boost the stock market’ initiative for Chinese New Year. People like to ride it and take pictures.”

According to Chinese astrology, the Ox stands for prosperity through fortitude and hard work, an attitude that the Chinese government has encouraged amid plunging exports and job losses.

People born under the sign are thought to be natural leaders, and include Barack Obama, Saddam Hussein, Margaret Thatcher, Adolf Hitler and Napoleon Bonaparte. The People’s Republic of China was also created in the year of the Ox.

Older Chinese reflected, however, on the transformation of the country since the last year of the Ox. “Twelve years is like a blink. Last year of the Ox, we did not have air conditioner, now my place has three,” said Wang Jing, a 56-year-old property manager.

“We didn’t have a computer or a car. Everything looks brighter now, but the people have also changed. We used to be simpler and more honest. Now everyone worships money.”

In 2008, the glory of the Olympics provided little cheer after the traumas of the riots in Tibet, the frozen harvests and the Sichuan earthquake, which killed 90,000 people.