People having difficulties to survive will use their almost worthless dollars for food etc.

People will start to think again, leading to more blood supply going to the brain. 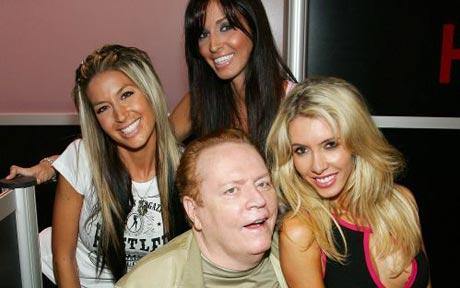 According to Flynt, with all this economic misery sex is the farthest thing from people’s mind Photo: GETTY

The pair have asked the 111th Congress, which convened on Tuesday with the economy at the top of its agenda, “to rejuvenate the sexual appetite of America” with a bailout.

“Congress seems willing to help shore up our nation’s most important businesses, (and) we feel we deserve the same consideration,” Francis said in a statement.

“The take here is that everyone and their mother want to be bailed out from the banks to the big three,” Owen Moogan, a spokesman for Flynt, told CNN.

In an interview with entertainment news website TMZ, Francis admitted the move was more of a “precautionary measure” than an emergency rescue, “but as long as the government is handing out money, we want to be there to take it.”

The pair acknowledge that although DVD sales and rentals have dropped 22 per cent over the past year, online traffic has continued to grow.

“The 13-billion-dollar industry is in no fear of collapse,” they say. “But why take chances?” Francis, who was last year freed from almost a year in jail after pleading no contest to child abuse and prostitution charges in a plea deal, told CNN they planned to deliver the request “to our congressmen and (Secretary of the Treasury Henry) Paulson” by the end of Wednesday.

“With all this economic misery and people losing all that money, sex is the farthest thing from their mind,” Flynt said in a statement. People were “too depressed to be sexually active”, which was “very unhealthy as a nation. Americans can do without cars and such, but they cannot do without sex.” He said the only way Congress could “rejuvenate” America’s sexual appetite was “by supporting the adult industry and doing it quickly.” There was no response from Congress to the request.