Hu Jintao has made his first visit back to the earthquake zone since the disaster struck in May after it emerged that millions of people were still homeless. 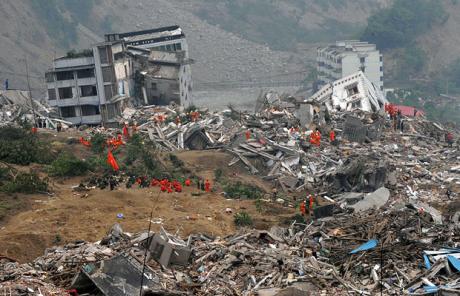 Only a handful of the five million people whose homes were destroyed by the strongest earthquake to hit China in half-a-century have managed to rebuild before the arrival of winter.

Piles of bricks and bags of cement line the road to Beichuan, near the epicentre of the quake, as peasants desperately try to erect structures that will shield them from the elements. The temperature in this mountainous region has already dipped to zero and will fall to as much as minus 20 degrees centigrade in the coming months.

As he surveyed the refugee camps, where the cold weather has triggered flu outbreaks, Mr Hu said: “The most important thing is to make sure all people are housed, have clothes and quilts to resist the cold, have enough food for the winter and coming spring and [that] medical services and epidemic prevention are in place.”

Hong Xiuqiong, 34, lives in a shack made of reclaimed wood and with a straw roof. “The government has stopped paying out the relief money and we have barely any food,” she said. “We only have a plastic sheet to wrap around the hut to try to make it waterproof.”

Mrs Hong, who lives with her baby, her husband and his family in the tiny hut, said she thought her 90-year-old father-in-law “may not make it”. She added: “I was tempted to commit suicide myself after the earthquake.”

A rash of suicides has spread across Beichuan as the survivors of the earthquake contemplate the years of poverty and helplessness ahead. In Lei Gu, a town of prefabricated cabins where many of the residents of Beichuan have moved, there have been two suicides and a third attempt in the past few weeks.

In Mianyang, the closest big city, two government officials have recently taken their lives. The 40-year-old director of the city’s human resources department leapt from a 15th floor window while Dong Yufei, a director of the disaster relief operation, hanged himself.

Dong’s 12-year-old son was one of the earthquake’s 88,000 victims, and the director was widely praised for his heroic actions during the disaster. He left a letter saying the pressure was too great, and that he needed “a good rest”.

Although China has pledged to spend £100 billion on rebuilding Sichuan, the province has only received £7 billion so far, and many charitable pledges have failed to materialise.

The relief operation in Lei Gu has housed 10,000 and the main thoroughfare of the town already boasts seven mobile phone shops in a row. But villagers complain that jobs are scarce, and that their cabins are damp and ill-equipped for the freeze.

“We don’t have any land to grow food for ourselves anymore,” said Xie Caijun, a 37-year-old fruit-seller. “The few people here with jobs work for the local schools. We will have hot water and heat this winter, but it will be hard. The residents of Lei Gu have been told they will have to stay in their cabins for at least three years before a rebuild can begin, so that proper planning can be carried out.

Some areas inside the earthquake zone now have an unemployment rate of 80 per cent, according to Li Chengyun, the vice governor of the province. More than a million farmers lost their land and tools, and the local economy has been devastated.

The economic crisis throughout the rest of China is also expected to weigh heavily on Sichuan. During China’s boom, the province sent over 20 million migrant workers to China’s cities. Now that jobs have dried up, a stream of migrants is returning home. The authorities have equipped many refugee camps with satellite television to try to diffuse tension and give residents something to do.

On the road to Lei Gu, Huang Jinchang has just started building his new home. “We started two months ago, it took a long time to get permission,” said the 44-year-old farmer. “Each family received between 16,000 rmb (£1,600) and 22,000 rmb from the government in compensation, and we’ve been given interest-free loans from the banks. But the price of bricks has doubled in the rush, as has the price of steel and cement. We’re not going to manage to finish before Chinese New Year [Jan 25].”