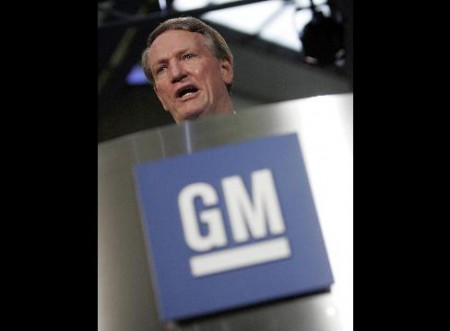 Dec. 23 (Bloomberg) — General Motors Corp. Chief Executive Officer Rick Wagoner said the biggest U.S. automaker got “what we asked for” with $9.4 billion in U.S. loans over the next 24 days. Investors bet that it’s not enough.

GM dropped as much as 18 percent today in New York trading to extend yesterday’s 22 percent plunge, while credit-default swaps on GM bonds rose 0.5 percentage point in a sign of increasing concern that the Bush administration’s bailout may end in a default.

The stock-price slide erased the 23 percent gain on Dec. 19, when Detroit-based GM received a federal aid package to help the automaker stay in business until March 31 while it crafts a plan to shut plants, shed brands and reduce debt.

“It’s almost impossible for a management that invested in the assets, that hired the people, that put forth the strategy, to change so dramatically in such a short period of time,” Edward Altman, a New York University finance professor who created the Z-score formula to measure bankruptcy risk, said in a Bloomberg Television interview.

There is a “high” likelihood of a GM bankruptcy, Standard & Poor’s said yesterday in reducing the rating on the company’s unsecured debt to C, or 11 grades below investment quality. Robert Schulz, an S&P analyst in New York, said creditors can expect “negligible recovery” should the automaker default.

GM has slashed output and won union concessions since saying Nov. 7 it may run out of operating cash by year’s end. The automaker said it would need as much as $18 billion in aid or face a possible bankruptcy.

The loans are “going to get us through this rocky period,” Wagoner told Detroit radio station WJR yesterday. “The funding that we received is what we asked for.”

Shareholders may be “wiped out” by the restructuring needed for the bailout, analyst Christopher Ceraso of Credit Suisse AG said yesterday. He cut his rating to “underperform” from “neutral” and slashed his target price in half to $1.

The upfront price on GM credit-default swaps rose 0.5 percentage point to 81.5 percent, according to CMA Datavision in New York. That’s in addition to 5 percent a year, meaning it would cost $8.15 million initially and $500,000 a year to protect $10 million of GM bonds for five years.

GM’s 8.375 percent note due July 2033 fell 2.5 cents to 16 cents on the dollar, according to Trace, the bond-pricing service of the Financial Industry Regulatory Authority. The yield was 52.2 percent.

Wagoner said last week that having secured the federal loans, GM’s biggest challenges would be working with debt holders on debt-for-equity exchanges and negotiating cost-saving agreements with unions.

He told WJR yesterday that he had “done a significant amount of thinking” about a new plan to keep the U.S. funds, though “it’s fair to say a lot of that work will start up in earnest at the beginning of next year.”

GM is struggling with a 22 percent plunge in U.S. sales this year, worse than the 16 percent industrywide slide, and is considering paring its Pontiac lineup to one model from six and is trying to sell its Saab and Hummer franchises.

“Every aspect of the business is being examined and re- examined and re-examined,” Wagoner said in the radio interview. “If we keep doing that, we can find ways to squeak out some more costs that aren’t essential for customers and do things differently.”

“It’s not without some pain,” he said, without providing details.

That’s being optimistic, said Credit Suisse’s Ceraso, who is based in New York. The “best-case scenario” may be the “complete or near-complete elimination” of GM’s equity value, assuming that bondholders and the UAW agree to concessions under the bailout plan, he said.

Should those parties not reach an accord, “GM may still end up in bankruptcy court,” he said.

To contact the reporter on this story: Greg Bensinger in New York at gbensinger1@bloomberg.net